The Age of Doubt 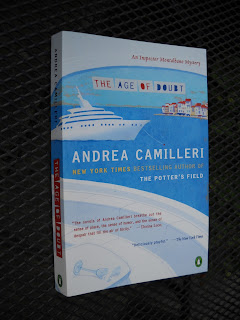 The day after a storm floods Vigata, Inspector Montalbano encounters a strange, bedraggled woman who expresses interest in a certain yacht scheduled to dock that afternoon. Not long after she's gone‚ the crew of the yacht reports having found a dinghy in the port, and within it, a disfigured corpse. Also at anchor is an eighty-five-foot luxury boat with a somewhat shady crew. Both boats will have to stay in Vigata until the investigation is over -the unidentified ma was poisoned, it seems. Based on the information -and misinformation- the mysterious woman shared with him‚ Montalbano begins to think the occupants of the yacht just might know a little more about the man’s death than they’re letting on.

Euro Crime concludes with this:

Because of its focus on Montalbano's continual agonising between Livia and other women, I would say that it isn't one of the strongest of the series. Nevertheless, there is plenty of Camilleri's trademark humour and charm to please his fans, and of course the able translation of Stephen Sartarelli enhances the whole.

Kirkus Reviews closes with this: "delves more deeply into the hero's interior life than usual. A droll delight for series fans, maybe not so much for new readers." Reviewing the Evidence calls it "Entertaining summer fare." The Telegraph says, "As is customary with Camilleri's novels, the delight is not in the crime plot - which is just as well, as most of the exposition comes in a rush at the end - but in the character of Montalbano." Publisher's Weekly says, "The awkward humanity and everyday sadness of Camilleri’s characters make them instantly sympathetic, while wry commentary on language, food, and local customs lend color."