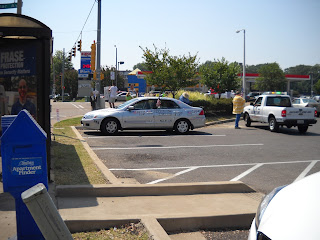 I have a lot of sympathy for their protest-du-jour emphasis, which was against another war, this time in Syria. I think the world would be better off if we didn't stick our noses and guns into other countries' civil wars. At least get us out of Iraq and Afghanistan first, before we start bombing some new country.

But the loony factor kept me from joining their happy band of sign wavers. For example, they think our utility company's "smart meters" program is some kind of plot, and they fear a "one-world government". Seriously? There are still folks who fear a one-world government?

I'd love to get a better picture, but they are right on the street corner at Poplar and Highland, which is a very busy intersection; and I admit I was trying to avoid getting so close as to invite personal interaction.
Posted by Divers and Sundry at 9:00 AM