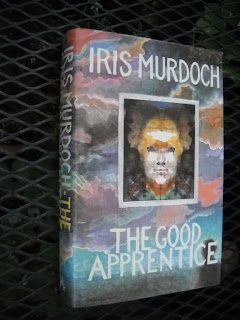 The Good Apprentice is a 1985 novel by Iris Murdoch, an author whose name on a book cover is enough for me to buy the book. This is yet another that makes me continue to feel that way. This was her 22nd novel, and she wrote 4 more novels after this. She died in 1999 at 79 years of age after suffering from Alzheimer's for several years.

Stuart Cuno has decided to become good. Not believing in God, he invents his own methods, which include celibacy, chastity and the abandonment of a promising academic career. Interfering friends and relations question his sincerity, his sanity and his motives. Stuart’s step-brother Edward Baltram is tormented by guilt because he has, he believes, killed his best friend. He dreams sometimes of redemption, sometimes of suicide. Edward is sent on a "journey to the underworld" to find his natural father, the painter Jesse Baltram, whom he has not seen since childhood. He discovers a father strangely different from his expectations, and succumbs to an enchantment quite unlike the redemptive cure for which he has been seeking; and meets perhaps the one person in the world who has the power to forgive him. Meanwhile Stuart’s moral apprenticeship is causing nothing but trouble. Coming to rescue Edward, Stuart provokes a final catastrophic clash of forces. Funny, compelling and extremely moving, Iris Murdoch's new novel is about obsessive guilt-ridden despair, and the difficult problem of how to try to be good -and the various magical devices which console those who are sensible enough not to try.

How does one live after total wickedness, total failure, total disgrace?

"Canst thou not minister to a mind diseased, pluck from the memory a rooted sorrow?"
"No."

So little needed to be changed for it all to be different.

I'm not mentally ill I'm spiritually ill. I never knew what that meant before. It's the fact, the fact I have to live with, what happened, what I did. People say, "you have to live with something", but I can't live with this, I can only die with it, except that I don't die.

We practice dying through a continual destruction of our self-images, inspired not by the self-hatred which seems to be within, but by the truth that seems to be without; such suffering is normal, it goes on all the time, it must go on.

Some memories are like lucky charms, talismans, one shouldn't tell about them or they'll lose their power.

One thing I think I've learnt is how to learn.

We all have horrors in our lives that have to be lived with. We must all harden our hearts about the harm we have done to others, forgive ourselves and forget our deeds as the victims of them would do if they were righteous.

I think religion is about good and evil and the distance between them.

There's a reference to a painting by Botticelli of angels embracing repentant sinners, but I can't figure out which painting that would be.

no other contemporary British novelist seems to me of her eminence. Her formidable combination of intellectual drive and storytelling exuberance may never fuse into a great novel, but she has earned now the tribute she made to Sartre more than 30 years ago. She too has the style of the age.

There is a Center for Iris Murdoch Studies.
Posted by Divers and Sundry at 9:00 AM