The Deathworld Trilogy is a compilation in one volume of Deathworld, Deathworld 2, and Deathworld 3 by Harry Harrison. It's great fun, and I can recommend it if you like science fiction of the alien planet adventure sort.

THE DEADLIEST PLANET IN THE UNIVERSE

Five minutes in a meadow on Pyrrus is like a century of global war on other worlds, for Pyrrus is a Killer World -a planet where all life, plant and animal, has evolved into lethal terrors, where all humanity lives barricaded in one fortress city.

Jason dinAlt is a gambler, about to start the most dangerous game of his life. Where but Pyrrus would he go?

How to Raise an Elephant

How to Raise an Elephant is the 21st book in the No. 1 Ladies Detective Agency series by Alexander McCall Smith. These are almost soothing in their ability to settle you into the environment with characters you've grown to know and love. They are high on relationships and light on mystery. Because the characters develop over time the books should be read in order. There's a delightful and perfectly cast TV adaptation that for some strange reason lasted only 1 season.

Precious Ramotswe loves her dependable old van. Yes, it sometimes takes a bit longer to get going now, but it has always gotten the job done. This time, though, the world -and Charlie- may be asking too much of it. After borrowing the beloved vehicle, he returns it damaged, and, to make matters worse, the interior seems to have acquired an earthy smell that even Precious can't identify.

On addition Mma Ramotswe is confronted by a distant relative, Blessing, who asks for help with an ailing cousin. The help requested is of a distinctively pecuniary nature, which makes both J>L>B> Matekoni and Mma Makutse a little uncomfortable. Still. Mma Ramotswe is confident that through kindness, grace, and logic -and the counsel of her friends and loved ones- the solutions to all these difficulties are there to be discovered.

Publishers Weekly calls it "leisurely" and says, "Series fans will be charmed, as usual..."
Posted by Divers and Sundry at 2:00 AM 22 comments:

Any Bullet Will Do

Any Bullet Will Do is a 2018 western. I watched it on Amazon Prime, but it's not there anymore. It is available for free on Tubi. This is a fairly standard revenge western, so it doesn't plough new ground but is fun if you like westerns.

The Cook of the Halcyon

The Cook of the Halcyon is the 27th book in the Inspector Montalbano mystery series by Andrea Camilleri. I get a kick out of the characters, and the food descriptions always make me long for Italian food. There's more humor in these than in most mystery books, but it's gently added without making the books at all funny. They should be read in order as the characters develop during the course of the series. I read them as my generous husband gives them to me. Alas, the author died back in 2019, and there is just one more.

Giovanni Tricanato has brought ruin to the shipyard he inherited from his father, and when a newly fired worker hangs himself from a hull under construction, Inspector Montalbano is called to the scene. In short order, the Inspector loses his temper with the crass Giovanni and delivers a slap to his face. Unfortunately, it won't be the last he sees of Trincanato. Meanwhile, a mysterious schooner called the Halcyon shows up in the harbor, seemingly deserted except for just one man. With its presence come even more mysteries, another death, and the arrival of the FBI. Alongside Sicilian American agent Penninsi, Montalbano and his team must attempt a suspenseful infiltration operation in this new page-turning Inspector Montalbano mystery.

Publishers Weekly says, "Once again, Camilleri ... does a fine job balancing comedy and crime."
Posted by Divers and Sundry at 2:00 AM 20 comments: 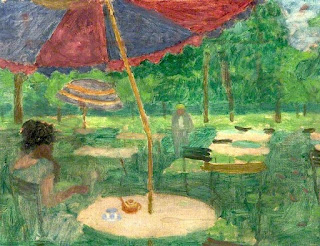 by Victor Pasmore, who died on January 23, 1998, at age 89. Please post something drink-related and join the T Stands for Tuesday blogger gathering hosted by Bleubeard and Elizabeth.
Posted by Divers and Sundry at 4:00 AM 15 comments:

Stranger on the Third Floor

Stranger on the Third Floor is a 1940 film noir starring Peter Lorre and John McGuire. Elisha Cook Jr. is also in this, and it's always good to see him. Whether or not it's actually noir is debatable, but that's what Wikipedia says.


Noir of the Week calls it "The Film that Gave "Birth" to the Style called Film Noir". Time Out calls it "a remarkable film". DVD Talk calls it "a masterpiece in miniature." Rotten Tomatoes has a critics consensus score of 86%.
Posted by Divers and Sundry at 2:00 AM 14 comments:

The Naked Sun is a 1957 science fiction/mystery novel by Isaac Asimov. It's the 2nd book in his robot series. These are fun and easy to read, and don't need to be read in order.

from the back of the book:
A WORLD OF ROBOTS

Elijah Bailey was NOT prejudiced; he knew robots were not the terrifying menace imagined by the billions of Earthmen huddled in the safety of their completely enclosed cities.

Robots were ... tools, nothing more. Yet he could not help feeling uncomfortable on this planet where not only were the robots permitted to roam free, and in plain sight, but the people themselves thought nothing whatsover of stepping outside of the safety of their houses at any time of the day or night.

To a man raised in the womb of Earth, the very thought of open spaces were abhorent. But Lije Bailey found himself actually forced into the open air ... and in the company of a hated robot.

Intermezzo is a 1939 romantic drama film starring Leslie Howard and Ingrid Bergman. You can watch it free at Tubi at this link, at Internet Archive at this link, or below via DailyMotion:


Rotten Tomatoes has a consensus critics score of 100%.
Posted by Divers and Sundry at 2:00 AM 12 comments: 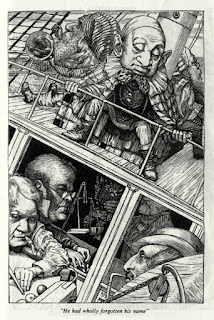 In Fit the First from Lewis Carroll's book The Hunting of the Snark:

There was one who was famed for the number of things
He forgot when he entered the ship:
His umbrella, his watch, all his jewels and rings,
And the clothes he had bought for the trip.

He had forty-two boxes, all carefully packed,
With his name painted clearly on each:
But, since he omitted to mention the fact,
They were all left behind on the beach.