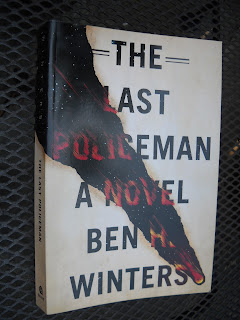 The Last Policeman is a 2012 pre-apocalyptic science fiction/mystery novel by Ben H. Winters. Wikipedia says, "Winters describes the work as an "existential detective novel"". The first in a projected trilogy, I'm looking so forward to the next books in the series. I loved this! I liked the set-up of impending disaster, and I enjoyed the character development showing how different people reacted under this particular stressor. It's an interesting concept coupled with an intriguing mystery. I found it shelved in the Mystery section at my local book store. It won the 2013 Edgar Award for best paperback original.

What's the point in solving murders if we're all going to die soon, anyway? Detective Hank Palace has faced this question ever since asteroid 2011GV1 hovered into view. There’s no chance left. No hope. Just six precious months until impact.

The Last Policeman presents a fascinating portrait of a pre-apocalyptic United States. The economy spirals downward while crops rot in the fields. Churches and synagogues are packed. People all over the world are walking off the job —but not Hank Palace. He’s investigating a death by hanging in a city that sees a dozen suicides every week —except this one feels suspicious, and Palace is the only cop who cares. What's the point in solving murders if we're all going to die soon, anyway?

The first in a trilogy, The Last Policeman offers a mystery set on the brink of an apocalypse. As Palace’s investigation plays out under the shadow of 2011GV1, we’re confronted by hard questions way beyond "whodunit." What basis does civilization rest upon? What is life worth? What would any of us do, what would we really do, if our days were numbered?

Wired calls it "an entertaining and well-plotted tale" and points out that "The Last Policeman is not a science fiction tale. Let’s just get that out on the table. This is a crime story." Kirkus Reviews calls it "A promising kickoff to a planned trilogy". Slate says, "Winters’ plotting is sure-footed and surprising" and that he "reveals himself as a novelist with an eye for the well-drawn detail". Strange Horizons wanted something deeper but says, "If we ignore the weakening of the book's underlying premise, the rest of the novel offers a fun and competent police procedural story. The working-out of the murder offers enough twists to make the book an enjoyable experience and some of the pre-apocalyptic scenery is well-drawn."
Posted by Divers and Sundry at 6:30 AM