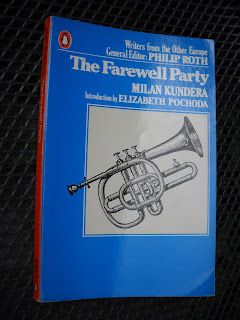 The Farewell Party (the English translation's title) is a novel by Milan Kundera originally published in 1972. I read the 1976 Peter Kussi translation.

Relationships of any kind are complicated. Who we are in a relationship with one person is colored by who we've been all our lives, the changing influences on us, our other relationships.... I think we can learn a lot about ourselves and our own character as we work through our various relationships.


A telephone call announcing an unwanted pregnancy sends Klima, jazz trumpeter from Prague, back to the fertility spa where he had spent a night with a pretty nurse named Ruzena. As Klima tries to persuade Ruzena to have an abortion, as Ruzena wavers between compliance and refusal, others are drawn into the conflict: Klima's lovely wife, Ruzena's jealous boyfriend, a mysterious and saintly American millionaire, a persecuted political dissident, and the spa's Dr. Skreta, who gleefully injects his own sperm into patients, thereby advancing his dream of the brotherhood of man. all these people are sharply etched by Milan Kundera's pen in a novel that exposes the crumbling illusions to which we cling, the swirling ambiguities that surround us.

Kirkus Reviews closes its review by saying, "Farewell is for those who like their Pilsner laced with wormwood."
Posted by Divers and Sundry at 9:00 AM