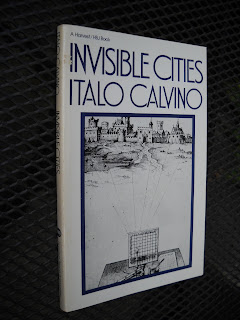 I could've sworn I had read Invisible Cities by Italo Calvino, but I couldn't find any note of it anywhere. I decided to read it, and, sure enough, I remembered having read it before. I love this author, and this is a fascinating read.

When a man rides a long time through wild regions he feels the desire for a city.

The back of the book just quotes from Gore Vidal's article in The New York Review of Books. Here's the Wikipedia description:

The book explores imagination and the imaginable through the descriptions of cities by an explorer, Marco Polo. The book is framed as a conversation between the aging and busy emperor Kublai Khan, who constantly has merchants coming to describe the state of his expanding and vast empire, and Polo. The majority of the book consists of brief prose poems describing 55 cities, apparently narrated by Polo. Short dialogues between the two characters are interspersed every five to ten cities and are used to discuss various ideas presented by the cities on a wide range of topics including linguistics and human nature. The book is structured around an interlocking pattern of numbered sections, while the length of each section's title graphically outlines a continuously oscillating sine wave, or perhaps a city skyline. The interludes between Khan and Polo are no less poetically constructed than the cities, and form a framing device, a story within a story, that plays with the natural complexity of language and stories.

Marco Polo and Kublai Khan do not speak the same language. When Polo is explaining the various cities, he uses objects from the city to tell the story. The implication is that that each character understands the other through their own interpretation of what they are saying. They literally are not speaking the same language, which leaves many decisions for the individual reader.

The book, because of its approach to the imaginative potentialities of cities, has been used by architects and artists to visualize how cities can be, their secret folds, where the human imagination is not necessarily limited by the laws of physics or the limitations of modern urban theory. It offers an alternative approach to thinking about cities, how they are formed and how they function.

The NPR reviewer says, "The question that Calvino seems to be asking is a big one: How should we live?" and, "There is so much there there. It's best, I think, to read Invisible Cities like a traveler — slowly, luxuriously, as if you have all the time in the world." The New York Times calls it an "ineffably lovely book". Kirkus Reviews says, "The assumption of the invisible cities is that we will, no matter what, always have recognitions to share in common and that they may be essential ones." The Guardian says,

Invisible Cities is a metafictional guide to Venice, an elegy to a succession of exotic and remote cities that are all versions of Venice, according to the Venetian traveller Marco Polo – who in Calvino's book describes them to the emperor Kublai Khan. He never mentions Venice, instead he describes all the other fantastic places he claims to have visited. But when Khan asks him to speak of Venice he replies: "What else do you believe I have been talking to you about?"