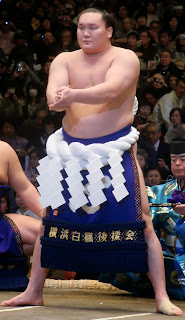 Hakuho has won another one! Asia & Japan Watch opens an early report with this: "With blood trickling down his face, yokozuna Hakuho defeated ozeki Kisenosato on Sept. 28 to win his fourth straight Emperor’s Cup at the Autumn Grand Sumo Tournament" and updates the story with this: "Mongolian yokozuna Hakuho put the finishing touches on his fourth straight Emperor's Cup in style with a convincing win over compatriot Harumafuji on Sept. 29, the final day of the Autumn Grand Sumo Tournament." Japan Times says, "The Mongolian won his fourth consecutive championship, moving him within four of yokozuna great Chiyonofuji’s hallowed mark of 31 career titles. Hakuho is alone in third place on the all-time list behind Chiyonofuji and Taiho at 32."

The photo at the top of the post is from Wikipedia.
Posted by Divers and Sundry at 1:00 PM