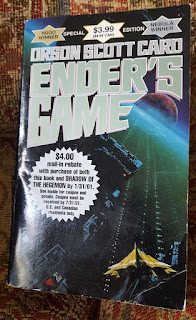 Ender's Game is an award-winning science fiction book by Orson Scott Card. It is first in a long-running series. This is a classic and one of those must-read books in modern science fiction for those interested in the genre. I've read it before, but any book worth reading is worth re-reading. It was adapted for film, and that is also worthwhile.

from the Wikipedia entry:


Ender's Game is a 1985 military science fiction novel by American author Orson Scott Card. Set at an unspecified date in Earth's future, the novel presents an imperiled mankind after two conflicts with the Formics, an insectoid alien species which they dub the "buggers". In preparation for an anticipated third invasion, children, including the novel's protagonist, Andrew "Ender" Wiggin, are trained from a very young age through increasingly difficult games including some in zero gravity, where Ender's tactical genius is revealed.

The book originated as the short story "Ender's Game", published in the August 1977 issue of Analog Science Fiction and Fact. Elaborating on characters and plot lines depicted in the novel, Card later wrote additional books to form the Ender's Game series. ...

Reception of the book has generally been positive. It has also become suggested reading for many military organizations, including the United States Marine Corps. Ender's Game won the 1985 Nebula Award for best novel and the 1986 Hugo Award for best novel.

SF Reviews begins its review with this: "Ender's Game is one of the great ones, a novel of extraordinary power that is among the very best the genre has produced."
Posted by Divers and Sundry at 4:00 AM