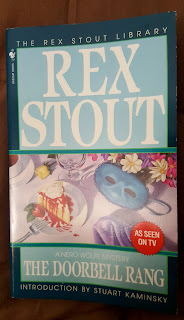 The Doorbell Rang is a Nero Wolfe detective novel by Rex Stout. Though published in 1965, it's still quite relevant in how it portrays the FBI as a too-powerful, secretive, aggressively abusive, government agency at odds with the best interest of citizens. This is the last of the Nero Wolfe books that have been loaned to me by The Younger Son and so will be the last I read until he obtains more. I have thoroughly enjoyed this series.


There's no one and nothing the great detective Nero Wolfe wouldn't take on if the price was right. That's something wealthy society widow Rachel Bruner is counting on when she writes him a check for a whopping hundred grand. But even Wolfe has a moment's doubt when he finds out why the prize is so generous. For the oversize genius and he able assistant Archie Goodwin are about to link horns with the FBI -and those highly trained G-men have a way with threats, tails, and bugs that could give even sedentary sleuth Nero Wolfe a run for his money.

This book has been adapted twice in English. 1) the A and E Mystery series starring Maury Chaykin and Timothy Hutton:

That entire video series is worth watching, and we have it on DVD and re-watch them every once in a while. The adaptations are well done and might even be considered better than the books.

This should at best be called a loose adaptation, since it's said to include a romantic subplot involving Wolfe. I haven't seen this one and have no need to with the entire Chaykin/Hutton series on my shelf.