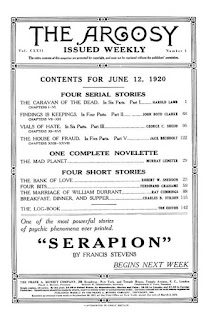 The Mad Planet is a 1920 science fiction story by Murray Leinster, a prolific and influential writer with a career spanning 6 decades. I remember when he died in 1975 at 78 years of age. You can read this story online here and have it read to you at Librivox. It begins,


In All His lifetime of perhaps twenty years, it had never occurred to Burl to wonder what his grandfather had thought about his surroundings. The grandfather had come to an untimely end in a rather unpleasant fashion which Burl remembered vaguely as a succession of screams coming more and more faintly to his ears while he was being carried away at the top speed of which his mother was capable.

Burl had rarely or never thought of the old gentleman since. Surely he had never wondered in the abstract of what his great grandfather thought, and most surely of all, there never entered his head such a purely hypothetical question as the one of what his many-times-great-grandfather—say of the year 1920—would have thought of the scene in which Burl found himself.

He was treading cautiously over a brownish carpet of fungus growth, creeping furtively toward the stream which he knew by the generic title of "water." It was the only water he knew. Towering far above his head, three man-heights high, great toadstools hid the grayish sky from his sight. Clinging to the foot-thick stalks of the toadstools were still other fungi, parasites upon the growth that had once been parasites themselves.

Burl himself was a slender young man wearing a single garment twisted about his waist, made from the wing-fabric of a great moth the members of his tribe had slain as it emerged from its cocoon. His skin was fair, without a trace of sunburn. In all his lifetime he had never seen the sun, though the sky was rarely hidden from view save by the giant fungi which, with monster cabbages, were the only growing things he knew. Clouds usually spread overhead, and when they did not, the perpetual haze made the sun but an indefinitely brighter part of the sky, never a sharply edged ball of fire. Fantastic mosses, misshapen fungus growths, colossal molds and yeasts, were the essential parts of the landscape through which he moved.

Once as he had dodged through the forest of huge toadstools, his shoulder touched a cream-colored stalk, giving the whole fungus a tiny shock. Instantly, from the umbrella-like mass of pulp overhead, a fine and impalpable powder fell upon him like snow. It was the season when the toadstools sent out their spores, or seeds, and they had been dropped upon him at the first sign of disturbance.

Furtive as he was, he paused to brush them from his head and hair. They were deadly poison, as he knew well.

Burl would have been a curious sight to a man of the twentieth century. His skin was pink, like that of a child, and there was but little hair upon his body. Even that on top of his head was soft and downy. His chest was larger than his forefathers' had been, and his ears seemed almost capable of independent movement, to catch threatening sounds from any direction. His eyes, large and blue, possessed pupils which could dilate to extreme size, allowing him to see in almost complete darkness.

He was the result of the thirty thousand years' attempt of the human race to adapt itself to the change that had begun in the latter half of the twentieth century.

At about that time, civilization had been high, and apparently secure. Mankind had reached a permanent agreement among itself, and all men had equal opportunities to education and leisure. Machinery did most of the labor of the world, and men were only required to supervise its operation. All men were well-fed, all men were well-educated, and it seemed that until the end of time the earth would be the abode of a community of comfortable human beings, pursuing their studies and diversions, their illusions and their truths. Peace, quietness, privacy, freedom were universal.

Then, just when men were congratulating themselves that the Golden Age had come again, it was observed that the planet seemed ill at ease. Fissures opened slowly in the crust, and carbonic acid gas—the carbon dioxide of chemists—began to pour out into the atmosphere. That gas had long been known to be present in the air, and was considered necessary to plant life. Most of the plants of the world took the gas and absorbed its carbon into themselves, releasing the oxygen for use again.

Scientists had calculated that a great deal of the earth's increased fertility was due to the larger quantities of carbon dioxide released by the activities of man in burning his coal and petroleum. Because of those views, for some years no great alarm was caused by the continuous exhalation from the world's interior.

Constantly, however, the volume increased.