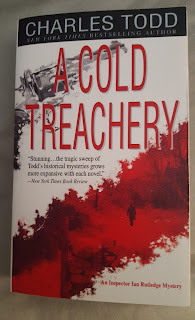 A Cold Treachery is the 7th book in Charles Todd's Inspector Ian Rutledge detective series. The series takes place in the immediate post-WWI period. This particular book takes place in the winter, with snow on the ground. I continue to enjoy this series. The main character is engaging, the other characters have depth, the plots are intriguing, and the books are real page-turners. I'd recommend beginning with the first in the series, as his war experience and resultant shell shock are key to understanding the character and are more fully explored in that book.

Called out into the teeth of a violent blizzard, Inspector Ian Rutledge faces one of the most savage murders he's ever encountered. He might have expected such unspeakable carnage on the World War I battlefields where he'd lost much of his soul -and his sanity- but not in an otherwise peaceful farm kitchen in remote Urskdale. Someone has murdered the Elcott family without the least sign of struggle. But when the victims are tallied, the local police are in for another shock: One child is missing. Now the Inspector must race to save a young boy before he's silenced by the murderous elements -or the even colder hands of the killer who hides in the blinding snow.

As you might think, much tea is offered and accepted in this book. Here's an early example:

"Would you care for a cup of tea?" She gestured to the kettle on the stove.

"Yes, please," he answered, already awash with it but suddenly unwilling to be alone. The kitchen was ordinary, quiet, cozy -it had nothing to do with a murdered family or the faces of a jury or the voice of Hamish MacLeod in the rear seat. Nothing to do with the overwhelming mountains outside or the duty he had come to carry out. He wanted only to sit down in one of the chairs nd think about the crackle of the fire and the warmth that was spreading through him and the drowsiness that would follow. Without dreams, because the light kept them at bay and the woman in the chair somehow reminded him of Olivia Marlowe.... But Olivia Marlowe -the war poet O.A. Manning- was dead, buried in Cornwall. Beyond his reach. Shaking himself awake, he began to take off his gloves, scarf, and coat, setting them with his hat on one of the chairs. Miss Fraser was busy with the tea, and without getting in her way he stood to one side of the great iron stove, absorbing the heat.

Won't you join me in a cozy cuppa and visit with the T Stands for Tuesday bloggers linked at Bleubeard and Elizabeth's blog?
Posted by Divers and Sundry at 4:00 AM