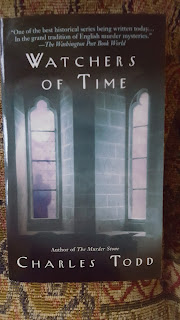 Watchers of Time (2001) is the 5th in the Inspector Ian Rutledge book series by Charles Todd. The Inspector is a casualty of WW1 struggling to take back up his civilian career. He is able to hide his shell shock, keeping people at a distance, and is haunted by the Scots soldier he executed on the battlefield.

I pick these up as I find them and am not reading them in order. This one begins in September of 1919.


In a marshy Norfolk backwater, a priest is brutally murdered after giving a dying man last rites. For Scotland Yard's Ian Rutledge, an ex-officer still recovering from the trauma of war, it looks to be a simple case. Yet the Inspector finds himself uncovering secrets that the local authorities would prefer not to see explored. Rutledge pares away layers of deception to piece together a chain of events that stretches from the brooding marshes to one of the greatest sea disasters in history -the sinking of the Titanic. Who is the mysterious woman who survived it? Only Rutledge can answer those questions... and prevent a killer who'll stop at nothing from striking again.