The Diary of a Madman 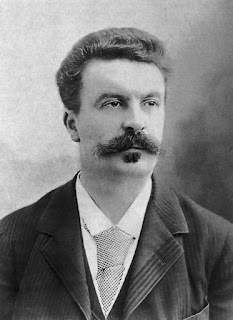 The Diary of a Madman is an 1886 short story by Guy de Maupassant. Wikipedia says this:


In his later years he developed a constant desire for solitude, an obsession for self-preservation, and a fear of death and paranoia of persecution caused by the syphilis he had contracted in his youth. It has been suggested that his brother, Hervé, also suffered from syphilis and the disease may have been congenital. On 2 January 1892, Maupassant tried to commit suicide by cutting his throat, and was committed to the private asylum of Esprit Blanche at Passy, in Paris, where he died 6 July 1893.

Guy De Maupassant penned his own epitaph: "I have coveted everything and taken pleasure in nothing." He is buried in Section 26 of the Montparnasse Cemetery, Paris.

He was 42 years old at the time of his death.


He was dead -the head of a high tribunal, the upright magistrate whose irreproachable life was a proverb in all the courts of France. Advocates, young counsellors, judges had greeted him at sight of his large, thin, pale face lighted up by two sparkling deep-set eyes, bowing low in token of respect.

He had passed his life in pursuing crime and in protecting the weak. Swindlers and murderers had no more redoubtable enemy, for he seemed to read the most secret thoughts of their minds.

He was dead, now, at the age of eighty-two, honored by the homage and followed by the regrets of a whole people. Soldiers in red trousers had escorted him to the tomb and men in white cravats had spoken words and shed tears that seemed to be sincere beside his grave.

But here is the strange paper found by the dismayed notary in the desk where he had kept the records of great criminals! It was entitled: