This was written about a week ago: 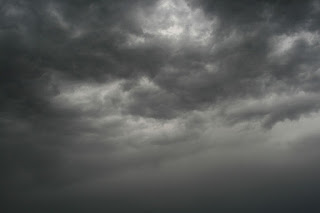 We're doing the best we can but are sadly failing so far to live within our current means. We do have a pad in the checking account, but that's been gradually shrinking as outgo surpasses income. That just won't do. Plus we've been notified that The Husband's long-term care insurance premium is going to increase by about $45 a month. The one thing I can think of to do -and I hate to do it- is decrease the amount that's deducted from the paycheck for retirement savings.

I realize it's early days yet and we're only a couple of months into these new constraints, but it's frustrating when we cut back so much and it's still not enough. I wish there was a magic way to make this same amount of money go further. I'm not seeing much else we can do to cut expenses.

The dark cloud photo at the top of the post illustrates my current mood. I'd love suggestions and recommendations if anybody has them.

The Husband and I went over the expenses since the income cut-back and think we'll postpone cutting back on pension contributions for now and just continue to watch things. I hadn't taken into consideration that city and county property taxes and an increase in HOA fees that we paid in a lump sum had taken a toll. Things aren't as bad as I feared, and I just need to allow more time for it all to shake down. Patience and persistence, that's what I need. I was fretting, which isn't helpful. So the photo below illustrates my new current, more hopeful mood.

I'd still appreciate any suggestions and recommendations.

The moral is, Don't Panic! Slow and Steady! Persistence is its own reward! And all those other encouraging lessons you've heard a million times but completely ignore when you need them most. If you think things are going bad, reconsider, ask someone what they think, get your mind off of it for a while, have a soothing hot beverage, and come back to the problem when you're refreshed. It's never as bad as you thought it was. Well, almost never. 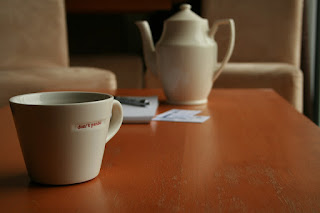