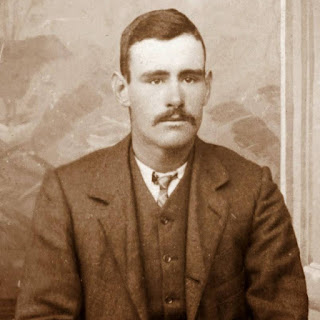 Thurnley Abbey is a well-regarded 1908 ghost story by Perceval Landon. It begins,


Three years ago I was on my way out to the East, and as an extra day in London was of some importance, I took the Friday evening mail-train to Brindisi instead of the usual Thursday morning Marseilles express. Many people shrink from the long forty-eight-hour train journey through Europe, and the subsequent rush across the Mediterranean on the nineteen-knot Isis or Osiris; but there is really very little discomfort on either the train or the mail-boat, and unless there is actually nothing for me to do, I always like to save the extra day and a half in London before I say goodbye to her for one of my longer tramps. This time -it was early, I remember, in the shipping season, probably about the beginning of September- there were few passengers, and I had a compartment in the P. & O. Indian express to myself all the way from Calais. All Sunday I watched the blue waves dimpling the Adriatic, and the pale rosemary along the cuttings; the plain white towns, with their flat roofs and their bold "duomos," and the grey-green gnarled olive orchards of Apulia. The journey was just like any other. We ate in the dining-car as often and as long as we decently could. We slept after luncheon; we dawdled the afternoon away with yellow-backed novels; sometimes we exchanged platitudes in the smoking-room, and it was there that I met Alastair Colvin.

Colvin was a man of middle height, with a resolute, well-cut jaw; his hair was turning grey; his moustache was sun-whitened, otherwise he was clean-shaven -obviously a gentleman, and obviously also a pre-occupied man. He had no great wit. When spoken to, he made the usual remarks in the right way, and I dare say he refrained from banalities only because he spoke less than the rest of us; most of the time he buried himself in the Wagon-lit Company's time-table, but seemed unable to concentrate his attention on any one page of it. He found that I had been over the Siberian railway, and for a quarter of an hour he discussed it with me. Then he lost interest in it, and rose to go to his compartment. But he came back again very soon, and seemed glad to pick up the conversation again.


Of course this did not seem to me to be of any importance. Most travellers by train become a trifle infirm of purpose after thirty-six hours' rattling. But Colvin's restless way I noticed in somewhat marked contrast with the man's personal importance and dignity; especially ill suited was it to his finely made large hand with strong, broad, regular nails and its few lines. As I looked at his hand I noticed a long, deep, and recent scar of ragged shape. However, it is absurd to pretend that I thought anything was unusual. I went off at five o'clock on Sunday afternoon to sleep away the hour or two that had still to be got through before we arrived at Brindisi.

Once there, we few passengers transhipped our hand baggage, verified our berths--there were only a score of us in all--and then, after an aimless ramble of half an hour in Brindisi, we returned to dinner at the Httel International, not wholly surprised that the town had been the death of Virgil. If I remember rightly, there is a gaily painted hall at the International--I do not wish to advertise anything, but there is no other place in Brindisi at which to await the coming of the mails--and after dinner I was looking with awe at a trellis overgrown with blue vines, when Colvin moved across the room to my table. He picked up Il Secolo, but almost immediately gave up the pretence of reading it. He turned squarely to me and said:

"Would you do me a favour?"

One doesn't do favours to stray acquaintances on Continental expresses without knowing something more of them than I knew of Colvin. But I smiled in a noncommittal way, and asked him what he wanted. I wasn't wrong in part of my estimate of him; he said bluntly:

"Will you let me sleep in your cabin on the Osiris?" And he coloured a little as he said it.

Now, there is nothing more tiresome than having to put up with a stable-companion at sea, and I asked him rather pointedly:

"Surely there is room for all of us?" I thought that perhaps he had been partnered off with some mangy Levantine, and wanted to escape from him at all hazards.

Colvin, still somewhat confused, said: "Yes; I am in a cabin by myself. But you would do me the greatest favour if you would allow me to share yours."

This was all very well, but, besides the fact that I always sleep better when alone, there had been some recent thefts on board English liners, and I hesitated, frank and honest and self-conscious as Colvin was. Just then the mail-train came in with a clatter and a rush of escaping steam, and I asked him to see me again about it on the boat when we started. He answered me curtly -I suppose he saw the mistrust in my manner- "I am a member of White's. I smiled to myself as he said it, but I remembered in a moment that the man -if he were really what he claimed to be, and I make no doubt that he was- must have been sorely put to it before he urged the fact as a guarantee of his respectability to a total stranger at a Brindisi hotel.

That evening, as we cleared the red and green harbour-lights of Brindisi, Colvin explained. This is his story in his own words.

You can read it online here, and listen to it here: