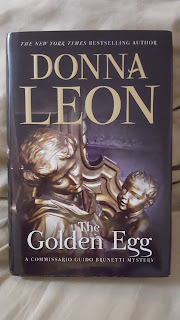 The Golden Egg, which takes place in Autumn, is the 22nd book in the Donna Leon mystery series featuring Commissario Guido Brunetti. I can't recommend this series highly enough. There's the perfect balance of engaging characters, fascinating plots, and Venetian atmosphere. You can't lose with these. This one is sadder than most of them and probably wouldn't be the one I'd suggest stating with. A tragic story.


Over the years, the best-selling Commissario Guido Brunetti series has conquered the hearts of mystery lovers all over the world. Brunetti is both a perceptive investigator and a principled family man, and through him, Leon has explored Venice in all its aspects: its history, beauty, food, and social life, but also the crime and corruption that lurks behind the beautiful surface.

In The Golden Egg, as the first leaves of autumn begin to fall, Vice Questore Patta asks Brunetti to look into a minor shop-keeping violation committed by the mayor's future daughter-in-law. Brunetti has no interest in helping his boss amass political favors, but he has little choice but to comply. Then Brunetti's wife, Paola, comes to him with a request of her own. The mentally handicapped man who worked at their dry cleaner has just died of a sleeping pill overdose, and Paola loathes the idea that he lived and died without anyone noticing him, or helping him.

To please his passionate wife, Brunetti begins to investigate the death. He is surprised when he finds nothing on the man: no birth certificate, no passport, no driver's license, no credit cards. As far as the Italian government is concerned, he never existed. And yet, there is the body, and Brunetti knows both the place and cause of death. Stranger still, the dead man's mother refuses to speak to the police, and assures Brunetti that her son's identification papers were stolen in a burglary. As secrets unravel, Brunetti suspects that the Lembos, an aristocratic family, might somehow be connected to the death. But why would anyone want this sweet, simple-minded man dead?

The New York Times calls it an "unusually reflective detective story" with a "melancholy mood". Kirkus Reviews has a positive review. Publishers Weekly concludes, "Brunetti amply displays the keen intelligence and wry humor that has endeared this series to so many."