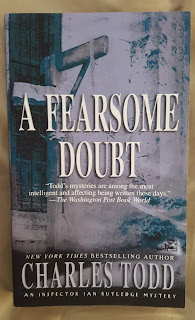 A Fearsome Doubt is the 6th book in the Inspector Rutledge series by Charles Todd. I'm reading these in mostly publication order as I can. I'm quite taken with the main character. There are 21 books so far, and this writing team shows no signs of stopping. What a joy it is to find a pleasing ongoing series of such length!


In 1912 Ian Rutledge helped gather the evidence that sent Ben Shaw to the gallows. Now, seven years later, Ben Shaw's widow brings Rutledge evidence she's convinced proves her husband's innocence. Ben Shaw's past is a tangle of unsettling secrets that may or may not be true. And it grows only more twisted when a seemingly unrelated murder brings Rutledge back to Kent. There an unexpected encounter revives his painful memories of war -and the voice of Hamish MacLeod, the soldier Rutledge was forced to execute. Two elusive killers are on the loose at the same time... and to catch them before they catch him, Rutledge will be forced to question everything he believes about right, wrong -and murder.

Publishers Weekly opens with this: "This brilliant and gripping whodunit may well be the best of Todd's six Rutledge novels". Kirkus Reviews concludes, "If everyone would read just one book, any book, by Todd ..., and pay close attention to what he’s saying, there would never be another war."