Legacy of the Dead 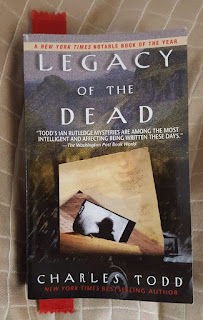 Legacy of the Dead is the 4th book in the Detective Ian Rutledge detective series by mother/son writing team Charles Todd. I like this WW1 shell-shocked veteran, who has made his way back to a career at Scotland Yard even while continuing to battle his inner demons.


The weathered remains found on a Scottish mountainside may be those of Eleanor Gray, but the imperious Lady Maude Gray, Eleanor's mother, will have to be handled delicately. This is not the only ground that Inspector Ian Rutledge must tread carefully, for the case will soon lead him to Scotland, where many of Rutledge's ghosts rest uneasily. Bt it is an unexpected encounter that will hold the most peril. For in Scotland Rutledge will find that the young mother accused of killing Eleanor Gray is a woman to whom he owes a terrible debt. And his harrowing journey to find the truth will lead him back through the fires of his past, into secrets that still have the power to kill.

Publishers Weekly closes with this: "readers will continue to be captivated by Todd's portrait of the dangerously unraveling detective, and his equally incisive evocation of the grieving postwar world". The New York Times says, "the portraits of wives and parents grieving for their lost boys contribute a severe grace to this study of postwar Scotland as a land rich in beauty but barren of new life."