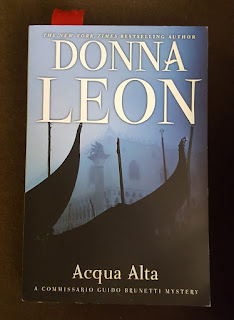 Acqua Alta is the 5th Commissario Guido Brunetti detective novel by Donna Leon. I'm reading these books as I can, filling in with ones I've missed as I get them. This one was a Christmas present. I enjoy the Venetian setting, the delightful characters and the plots that incorporate elements of the society/food/culture of Venice.


As Venice braces for the onslaught of a winter tempest and acqua alta -the rising waters from exceptionally high tides- Commissario Guido Brunetti is pulled from his warm bed to find that an old friend, Dotoressa Brett Lynch, has been savagely beaten in the palazzo home she shares with Flavia Petrelli, the reigning diva of La Scala. Brunetti suspects that this is not a simple crime, and then, as the flood waters rise, a corpse is discovered. Acqua Alta, sinister annd exotic, is "every fan's first pick Brunetti novel" (The New Yorker).

I offer these quotes as my connection to the T Stands for Tuesday blogger gathering (at which you are most welcome -just share a post with a drink reference):


Because it was after two when Brunetti got home that night, he slept until well past eight the next morning and woke only, and grudgingly, when Paola shook him lightly by the shoulder and told him coffee was beside him. He managed to fight off full consciousness for another few minutes, but then he smelled the coffee, gave up and seized the day.

Everywhere, he saw the same things he'd been seeing for days, but today he chose to call them signs of spring. Even the omnipresent pastel tourists lifted his heart. Via XXII Marzo pulled his steps down towards the Accademia Bridge. On the other side of it, he saw the season's first long line of tourists waiting to enter the museum, but he had seen enough of art for a while. The water drew him now and the thought of sitting in the young sun with Flavia, having a coffee, talking of this and that, seeing the way her face went so quickly from ease to joy and back again.

*******
Publishers Weekly concludes, "Intricate and intimate descriptions of Venetian life fill these pages and prove that Leon has once again created a high-stakes mystery in which the setting vibrates with as much life as the story itself." Kirkus Reviews calls it "routine" for the series.  Grove Atlantic has a plot description, quotes from reviews, a short excerpt, and a reading group guide.

When that Great Winter Storm moved through over the week-end and folks were sharing their snow wonderland photos it snowed here in Memphis, too! Yes, indeed, we saw a few flakes and got accumulations of up to, oh, I don't know... what do you think? 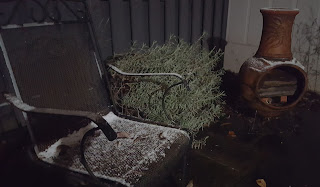 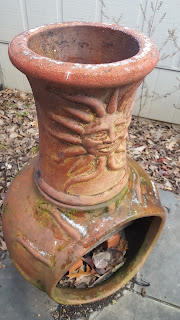 Not measurable, but visible, barely. By Sunday morning all that was left was a bit on the garage roof: 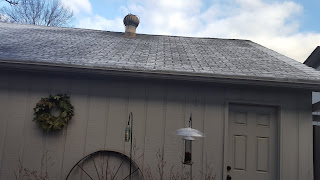 We enjoyed it while it lasted. You have to find joy where you can, after all.

On Sunday night we had the Full Blood Wolf Moon total eclipse, and although all I have is a cell phone I tried to take a few photos: 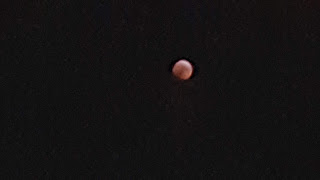 It was stunning in person, and we could even see stars. We were excited to have clear skies for the event.