The City and the City 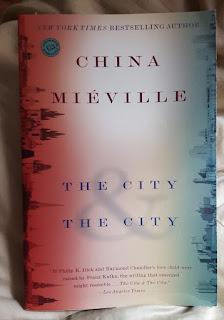 The City and the City is a multiple award-winning science fiction detective novel by China Mieville. This is one of those books I re-read every once in a while. Such a fascinating concept! This author is one I can't recommend highly enough. You can't go wrong choosing one of his books.


When a murdered woman is found in the city of Beszel, somewhere at the edge of Europe, it looks to be a routine case for Inspector Tyador Borlu of the Extreme Crime Squad. To investigate, Borlu must travel from the decaying Beszel to its equal, rival, and intimate neighbor, the vibrant city of Ul Quma. But this is a border crossing like no other, a journey as psychic as it is physical, a seeing of the unseen. With Ul Qoman detective Qussim Dhatt, Borlu is enmeshed in a sordid under-world of nationalists intent on destroying their neighboring city and unificationists who dream of dissolving the two into one. As the detectives uncover the dead woman's secrets, they begin to suspect a truth that could cost them more than their lives. What stands against them are murderous powers in Beszel and in Ul Qoma -and, most terrifying of all, that which lies between these two cities.

The Guardian begins with this: "China Miéville is perhaps the current generation's finest writer of science fantasy"; and ends with this: "Keeping his grip firmly on an idea which would quickly slip from the hands of a less skilled writer, Miéville again proves himself as intelligent as he is original." The Telegraph says, "it sparks thought in a way that more conventional novels would never dare to."

SF Reviews closes a positive review by saying, "At just over 300 pages, it's his shortest book, but also his most efficiently constructed and fast paced. And the sociopolitical themes explored in its subtext just make The City & the City doubly rewarding." Kirkus Reviews calls it a "spectacularly, intricately paranoid yarn". Publishers Weekly calls it an "outstanding take on police procedurals". The Masters Review says the book "unites speculative fiction with the noir detective novel."

It's been adapted as a 4-episode BBC Two series, but we don't get that channel. It's now showing on Amazon Prime, which we do get, and we watched it last month. Here's the trailer for the miniseries: