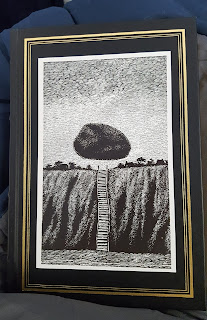 The Thirty-Nine Steps is a 1915 suspense adventure novel by John Buchan. Wikipedia says,


The Thirty-Nine Steps is one of the earliest examples of the 'man-on-the-run' thriller archetype subsequently adopted by film makers as an often-used plot device. In The Thirty-Nine Steps, Buchan holds up Richard Hannay as an example to his readers of an ordinary man who puts his country's interests before his own safety. The story was a great success with the men in the First World War trenches. One soldier wrote to Buchan, "The story is greatly appreciated in the midst of mud and rain and shells, and all that could make trench life depressing."

You can read it online here or here. It begins,


I returned from the City about three o’clock on that May afternoon pretty well disgusted with life. I had been three months in the Old Country, and was fed up with it. If anyone had told me a year ago that I would have been feeling like that I should have laughed at him; but there was the fact. The weather made me liverish, the talk of the ordinary Englishman made me sick, I couldn’t get enough exercise, and the amusements of London seemed as flat as soda-water that has been standing in the sun. ‘Richard Hannay,’ I kept telling myself, ‘you have got into the wrong ditch, my friend, and you had better climb out.’

It made me bite my lips to think of the plans I had been building up those last years in Bulawayo. I had got my pile — not one of the big ones, but good enough for me; and I had figured out all kinds of ways of enjoying myself. My father had brought me out from Scotland at the age of six, and I had never been home since; so England was a sort of Arabian Nights to me, and I counted on stopping there for the rest of my days.

But from the first I was disappointed with it. In about a week I was tired of seeing sights, and in less than a month I had had enough of restaurants and theatres and race-meetings. I had no real pal to go about with, which probably explains things. Plenty of people invited me to their houses, but they didn’t seem much interested in me. They would fling me a question or two about South Africa, and then get on their own affairs. A lot of Imperialist ladies asked me to tea to meet schoolmasters from New Zealand and editors from Vancouver, and that was the dismalest business of all. Here was I, thirty-seven years old, sound in wind and limb, with enough money to have a good time, yawning my head off all day. I had just about settled to clear out and get back to the veld, for I was the best bored man in the United Kingdom.

That afternoon I had been worrying my brokers about investments to give my mind something to work on, and on my way home I turned into my club — rather a pot-house, which took in Colonial members. I had a long drink, and read the evening papers. They were full of the row in the Near East, and there was an article about Karolides, the Greek Premier. I rather fancied the chap. From all accounts he seemed the one big man in the show; and he played a straight game too, which was more than could be said for most of them. I gathered that they hated him pretty blackly in Berlin and Vienna, but that we were going to stick by him, and one paper said that he was the only barrier between Europe and Armageddon. I remember wondering if I could get a job in those parts. It struck me that Albania was the sort of place that might keep a man from yawning.

About six o’clock I went home, dressed, dined at the Café Royal, and turned into a music-hall. It was a silly show, all capering women and monkey-faced men, and I did not stay long. The night was fine and clear as I walked back to the flat I had hired near Portland Place. The crowd surged past me on the pavements, busy and chattering, and I envied the people for having something to do. These shop-girls and clerks and dandies and policemen had some interest in life that kept them going. I gave half-a-crown to a beggar because I saw him yawn; he was a fellow-sufferer. At Oxford Circus I looked up into the spring sky and I made a vow. I would give the Old Country another day to fit me into something; if nothing happened, I would take the next boat for the Cape.

My flat was the first floor in a new block behind Langham Place. There was a common staircase, with a porter and a liftman at the entrance, but there was no restaurant or anything of that sort, and each flat was quite shut off from the others. I hate servants on the premises, so I had a fellow to look after me who came in by the day. He arrived before eight o’clock every morning and used to depart at seven, for I never dined at home.

I was just fitting my key into the door when I noticed a man at my elbow. I had not seen him approach, and the sudden appearance made me start. He was a slim man, with a short brown beard and small, gimlety blue eyes. I recognized him as the occupant of a flat on the top floor, with whom I had passed the time of day on the stairs.

‘Can I speak to you?’ he said. ‘May I come in for a minute?’ He was steadying his voice with an effort, and his hand was pawing my arm.

I got my door open and motioned him in. No sooner was he over the threshold than he made a dash for my back room, where I used to smoke and write my letters. Then he bolted back.

‘Is the door locked?’ he asked feverishly, and he fastened the chain with his own hand.

‘I’m very sorry,’ he said humbly. ‘It’s a mighty liberty, but you looked the kind of man who would understand. I’ve had you in my mind all this week when things got troublesome. Say, will you do me a good turn?’

‘I’ll listen to you,’ I said. ‘That’s all I’ll promise.’ I was getting worried by the antics of this nervous little chap.

There was a tray of drinks on a table beside him, from which he filled himself a stiff whisky-and-soda. He drank it off in three gulps, and cracked the glass as he set it down.

‘Pardon,’ he said, ‘I’m a bit rattled tonight. You see, I happen at this moment to be dead.’

It has been adapted for film 4 times. The first of these was the 1935 The 39 Steps, which was directed by Alfred Hitchcock and starred Robert Donat. Highly praised and generally considered a masterpiece, you can watch it online here: