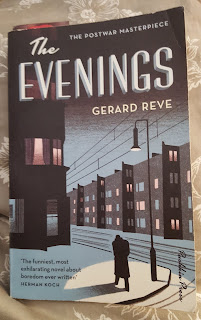 The Evenings is the 1947 debut novel of Dutch author Gerard Reve. I didn't expect it, but I found this one of the most encouraging books I've read in years. from Wikipedia:


The novel describes ten evenings out of the life of the 23-year-old office clerk Frits van Egters living in Amsterdam. It is partitioned into ten chapters, of which each describes an evening between 22 and 31 December 1946. The novel was written very shortly after World War II. Though the war itself is hardly mentioned, the story gives, by describing an individual's experiences, a detailed description of contemporary post-war society...


from the back of the book:


Twnty-three-year-old Fritz -office worker,daydreamer, teller of inappropriate jokes- finds life absurd and inexplicable. He lives with his parents, who drive him mad. He has terrible, disturbing dreams of death and destruction. Sometimes he talks to a toy rabbit. Darkly funny and mesmerizing, The Evenings takes the tiny quotidian triumphs and heartbreaks of our everyday lives and turns them into a work of brilliant wit and profound beauty.

The Guardian calls it a masterpiece. The LA Review of Books concludes a positive review with this: "The Evenings earns its status as a little masterpiece — a provocative reminder that life goes on even in the bleakest of circumstances."
Posted by Divers and Sundry at 4:00 AM