Reginald's Christmas Revel is a short story by Saki. Join me in a cup of something hot while you read it? 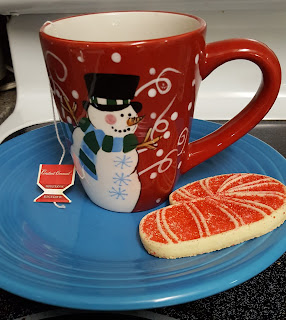 You can read it online here. It begins,


They say (said Reginald) that there's nothing sadder than victory except defeat. If you've ever stayed with dull people during what is alleged to be the festive season, you can probably revise that saying. I shall never forget putting in a Christmas at the Babwolds'. Mrs. Babwold is some relation of my father's -a sort of to-be-left-till-called-for cousin- and that was considered sufficient reason for my having to accept her invitation at about the sixth time of asking; though why the sins of the father should be visited by the children -you won't find any notepaper in that drawer; that's where I keep old menus and first-night programmes.

Mrs. Babwold wears a rather solemn personality, and has never been known to smile, even when saying disagreeable things to her friends or making out the Stores list. She takes her pleasures sadly. A state elephant at a Durbar gives one a very similar impression. Her husband gardens in all weathers. When a man goes out in the pouring rain to brush caterpillars off rose-trees, I generally imagine his life indoors leaves something to be desired; anyway, it must be very unsettling for the caterpillars.

Of course there were other people there. There was a Major Somebody who had shot things in Lapland, or somewhere of that sort; I forget what they were, but it wasn't for want of reminding. We had them cold with every meal almost, and he was continually giving us details of what they measured from tip to tip, as though he thought we were going to make them warm under-things for the winter. I used to listen to him with a rapt attention that I thought rather suited me, and then one day I quite modestly gave the dimensions of an okapi I had shot in the Lincolnshire fens. The Major turned a beautiful Tyrian scarlet (I remember thinking at the time that I should like my bathroom hung in that colour), and I think that at that moment he almost found it in his heart to dislike me. Mrs. Babwold put on a first-aid-to-the-injured expression, and asked him why he didn't publish a book of his sporting reminiscences; it would be so interesting. She didn't remember till afterwards that he had given her two fat volumes on the subject, with his portrait and autograph as a frontispiece and an appendix on the habits of the Arctic mussel.

It was in the evening that we cast aside the cares and distractions of the day and really lived. Cards were thought to be too frivolous and empty a way of passing the time...

You can listen to the story here:

I'm headed over to Bleubeard and Elizabeth's T Stands for Tuesday blogger gathering to see what everybody else is up to during the season.
Posted by Divers and Sundry at 4:00 AM