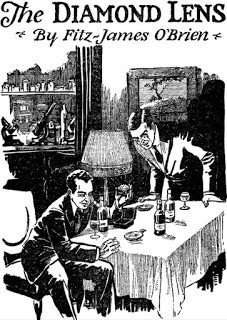 The Diamond Lens (1858) is the best and best-known story of Fitz James O'Brien. Wikipedia reports that "It was one of the favourite stories of H.P. Lovecraft". The SFF Audio site says, "James Gunn writes:


“[The Diamond Lens] is the first known story in which another world is perceived through a microscope… [this story] opened up another world, not just for readers, but for writers as well.” Gunn goes on to praise O’Brien’s “realistic treatment of the fantastic” and says that “‘The Diamond Lens‘” may be the first modern science-fiction story.”

You can read this story online here. It begins,


i
FROM a very early period of my life the entire bent of my inclinations had been toward microscopic investigations. When I was not more than ten years old, a distant relative of our family, hoping to astonish my inexperience, constructed a simple microscope for me by drilling in a disk of copper a small hole in which a drop of pure water was sustained by capillary attraction. This very primitive apparatus, magnifying some fifty diameters, presented, it is true, only indistinct and imperfect forms, but still sufficiently wonderful to work up my imagination to a preternatural state of excitement.

Seeing me so interested in this rude instrument, my cousin explained to me all that he knew about the principles of the microscope, related to me a few of the wonders which had been accomplished through its agency, and ended by promising to send me one regularly constructed, immediately on his return to the city. I counted the days, the hours, the minutes that intervened between that promise and his departure.

Meantime, I was not idle. Every transparent substance that bore the remotest resemblance to a lens I eagerly seized upon, and employed in vain attempts to realize that instrument the theory of whose construction I as yet only vaguely comprehended. All panes of glass containing those oblate spheroidal knots familiarly known as “bull’s-eyes” were ruthlessly destroyed in the hope of obtaining lenses of marvelous power. I even went so far as to extract the crystalline humor from the eyes of fishes and animals, and endeavored to press it into the microscopic service. I plead guilty to having stolen the glasses from my Aunt Agatha’s spectacles, with a dim idea of grinding them into lenses of wondrous magnifying properties — in which attempt it is scarcely necessary to say that I totally failed.

At last the promised instrument came.

The author was born in Ireland but immigrated to the U.S. in 1852, changing his name to Fitz James. He died of tetanus after being wounded during a Civil War skirmish in 1862.
Posted by Divers and Sundry at 4:00 AM