Oh, Mr Porter! is a 1937 comedy about a man who gets a new job as station master at a remote Northern Ireland railway station where no one will work due to its reputation for being haunted -"Local conditions would appear to be peculiar. We've sent them five station masters in twelve months." Mayhem results as he tries new ways to improve the station.


BFI Screen Online says, "Oh, Mr Porter! is full of moments to cherish". Empire Online closes with this: "Comedy very much of its time but there are worse ways to spend a rainy afternoon." Time Out says, "Some of the humour is rather dated now, but the atmospheric creation of a quaintly antiquated rural Britain - that never in reality existed - holds plenty of charm." Variety says, "the whole thing is amusing." Rotten Tomatoes has an audience consensus score of 92%.

To join in with the bloggers participating in T Stands for Tuesday, I offer this screenshot with drinks on the table: 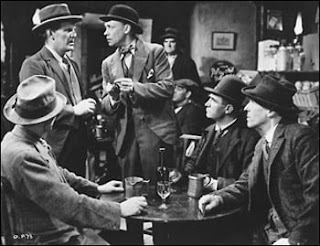 I'm behind in making ATCs, having been away for a week on vacation, but I hope to have some to post next week.