How Love Came to Professor Guildea 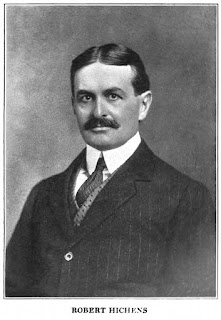 How Love Came to Professor Guildea is generally considered the best story Robert Hichens wrote. You can read it online here, or listen to it here. It begins,


Dull people often wondered how it came about that Father Murchison and Professor Frederic Guildea were intimate friends. The one was all faith, the other all scepticism. The nature of the Father was based on love. He viewed the world with an almost childlike tenderness above his long, black cassock; and his mild, yet perfectly fearless, blue eyes seemed always to be watching the goodness that exists in humanity, and rejoicing at what they saw. The Professor, on the other hand, had a hard face like a hatchet, tipped with an aggressive black goatee beard. His eyes were quick, piercing and irreverent. The lines about his small, thin-lipped mouth were almost cruel. His voice was harsh and dry, sometimes, when he grew energetic, almost soprano. It fired off words with a sharp and clipping utterance. His habitual manner was one of distrust and investigation. It was impossible to suppose that, in his busy life, he found any time for love, either of humanity in general or of an individual.

Yet his days were spent in scientific investigations which conferred immense benefits upon the world.

Both men were celibates. Father Murchison was a member of an Anglican order which forbade him to marry. Professor Guildea had a poor opinion of most things, but especially of women. He had formerly held a post as lecturer at Birmingham. But when his fame as a discoverer grew he removed to London. There, at a lecture he gave in the East End, he first met Father Murchison. They spoke a few words. Perhaps the bright intelligence of the priest appealed to the man of science, who was inclined, as a rule, to regard the clergy with some contempt. Perhaps the transparent sincerity of this devotee, full of common sense, attracted him. As he was leaving the hall he abruptly asked the Father to call on him at his house in Hyde Park Place. And the Father, who seldom went into the West End, except to preach, accepted the invitation.

"When will you come?" said Guildea.

He was folding up the blue paper on which his notes were written in a tiny, clear hand. The leaves rustled drily in accompaniment to his sharp, dry voice.

"On Sunday week I am preaching in the evening at St. Saviour's, not far off," said the Father.[271]

"No," said the Father, without any accent of surprise or condemnation.

"What time will you come?"

"As soon as I have finished my sermon. The service is at six-thirty."

"About eight then, I suppose. Don't make the sermon too long. My number in Hyde Park Place is a hundred. Good-night to you."

He snapped an elastic band round his papers and strode off without shaking hands.

On the appointed Sunday, Father Murchison preached to a densely crowded congregation at St. Saviour's. The subject of his sermon was sympathy, and the comparative uselessness of man in the world unless he can learn to love his neighbour as himself. The sermon was rather long, and when the preacher, in his flowing, black cloak, and his hard, round hat, with a straight brim over which hung the ends of a black cord, made his way towards the Professor's house, the hands of the illuminated clock disc at the Marble Arch pointed to twenty minutes past eight.