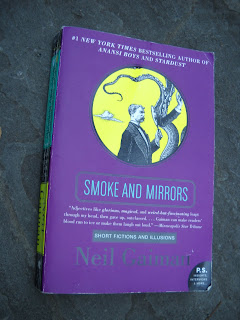 Smoke and Mirrors: Short Fictions and Illusions is a book by Neil Gaiman. This was loaned to me by The Younger Son at the same time as a Stephen King collection of short works. I prefer the King, which surprised me. I didn't expect to have a real preference, as I like both Gaiman's and King's longer works. At this point I'd read more of King's short stories but give Gaiman's a pass.

This book has several pieces that are poems. Or like poems. I just don't care for works in poetic form, except, of course, for limericks and Little Willie types. There are also a couple of folk/fairy tale re-tellings, and I don't generally like those. "Write your own story" -that's my motto.

SF Site says, "if you're not a fan of Neil Gaiman, read this collection and you will be." The Guardian recommends it as a good entry into Gaiman's work. Kirkus Reviews concludes their review with this:

Gaiman miscalculates only in leading off With “Chivalry,” the unforgettable tale of a placid widow who discovers the Holy Grail in a secondhand shop. Nothing later on matches it in a volume that’s otherwise an exhilarating display of the work of one of our most entertaining storytellers.

Posted by Divers and Sundry at 1:30 PM