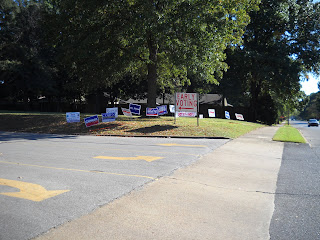 There didn't seem to me to be as many candidate signs as usual when The Daughter and I went to vote the other day, but what was striking to me was the absence of any Obama signs. Nary a one did I see. What's with that?

There was a long line, which I hadn't expected, but at least it didn't stretch out of the building. The entire process took about half an hour, which wasn't bad.

The woman behind us told The Daughter she looked too young to vote. The Daughter said, "That's what they told me last time." I wish strangers could make casual conversation without critiquing your personal appearance. We tend to think of things we can't say in response. Because, really, how do you respond to that? It's ok for that woman to say how young The Daughter looks, but if The Daughter responds with a comment on how old that woman looks... well, I know how that would've turned out. She's about ready to start responding to comments on how thin she is with comments on how fat they are. Comments about how fat someone is are rude, though, right? But comments about how thin someone is are ok? How is that ok?

I surely did get sidetracked.

To get back to the signs (or lack of them) at Early Voting: I thought I'd pick up a couple of signs and place them myself. I couldn't find an Obama headquarters here. There's a Cohen headquarters. Maybe they would have Obama signs. I think since Tennessee is lost to Obama, and our votes don't matter, it's not worth it to them to bother with things like campaign signs. I think that's so sad.

Maybe I should've voted for Jill Stein.
Posted by Divers and Sundry at 3:00 PM