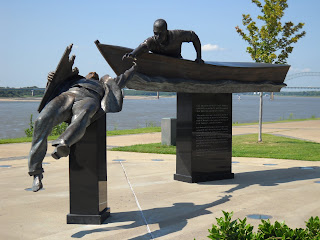 This sculpture in Tom Lee Park was created by David Alan Clark and installed in 2006. I remember hearing the story from my youth, how in 1925 a "very worthy negro" (as the obelisk from 1954 calls him), though he could not swim, saved the lives of steamboat passengers after an explosion on board. He is


"personally credited with using a small rowboat to save the lives of 32 passengers. He acted with no regard for his own safety, continuing to search after night fell. Because of his efforts, only 23 people died."

The Grandmother was a child when it happened.
Posted by Divers and Sundry at 6:30 AM