Chipmunks on the Patio 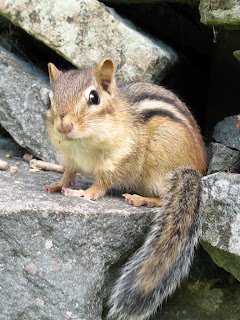 Try as I might I haven't been able to get a picture of this little creature, running back and forth across the patio. She comes from the townhouse next door. I'm not sure if she's just passing through our patio or making her winter nest here someplace. One of their old entry spots was under the concrete pad our central unit sits on, and I kept filling it up with rocks until she finally gave that up. No telling where the access is now. We're assuming ours is an Eastern Chipmunk, and so I've used a Wikipedia picture of one of those at the top of this post.


The genus name Tamias means “storer” and the species name Striatus means “striped”. That is the perfect name because this squirrel is a striped storer. They carry seeds and nuts in their expandable cheek pouches to underground storerooms for eating later.

I think they like the seeds and cover my wild sunflowers provide. 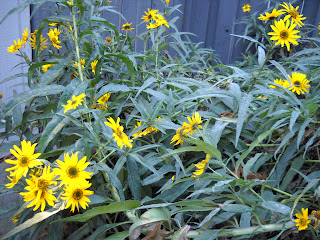 We've been enjoying watching the chipmunk carry things across the patio, then come back across, then carry something else across the patio. Reportedly, they don't actually hibernate in the winter but enter a period of torpor for several days at a time. Then they wake up to eat some of that stored food and go back to sleep. I remember a picture book the kids had when they were little that had a picture of a chipmunk all curled up in its underground burrow safe and warm for winter. Sweet. I imagine that's what our chipmunk is doing -storing up treats for winter.

Usually, they sound like birds chirping. When they're being attacked by a cat, they scream. It's horrible. We've heard it more than once, and it hurts. But cats don't know, do they? It's part of their nature to attack small furry moving creatures, and one can't fault them for it. You can hear some of the sounds they make here or watch the chipmunk calling: