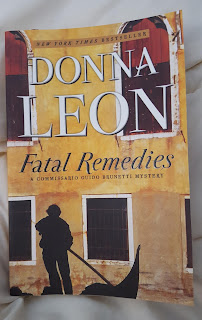 Fatal Remedies in the 8th book in the Inspector Guido Brunetti series by Donna Leon. I enjoy these, the setting, the characters, the plots, and am asking for them for presents. They should be read in order as the characters develop over time, but I read my first few out of order having found them in a local used book store.

This one takes place in November.

It all begins with an early morning phone call. In the chill of the Venetian dawn, a sudden act of vandalism shatters the quiet of the city, and Brunetti is shocked to find that the culprit waiting to be apprehended at the scene is his own wife, Paola. She has taken a stand against a travel agency known for a certain kind of shady tourism. Meanwhile, at work, Brunetti is under pressure from his superiors to solve a daring robbery with a link to a suspicious accidental death. Does it all lead back to the mafia? And how are his family's actions connected to these crimes?