The Horse of the Invisible

Pull up a chair and let me pour you a cozy cup, may I? 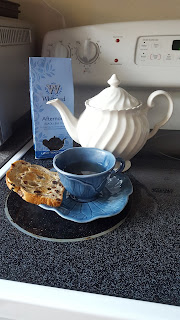 Please join me at the T Stands for Tuesday blogger gathering.

There's nothing quite as engaging as these old tales.

The Horse of the Invisible is a 1910 short story by William Hope Hodgson. It features his detective Carnacki, who specializes in the occult. You can read it online here. It begins,


When I reached 427, Cheyne Walk, Chelsea, I found Carnacki sitting alone. As I came into the room, he rose with a perceptibly stiff movement, and extended his left hand. His face seemed to be badly scarred and bruised, and his right hand was bandaged. He shook hands and offered me his paper, which I refused. Then he passed me a handful of photographs, and returned to his reading.

Now, that is just Carnacki. Not a word had come from him, and not a question from me. He would tell us all about it later. I spent about half an hour, looking at the photographs, which were chiefly "snaps" (some by flashlight) of an extraordinarily pretty girl; though in some of the photographs it was wonderful that her prettiness was so evident, for so frightened and startled was her expression, that it was difficult not to believe that she had been photographed in the presence of some imminent and overwhelming danger.

The bulk of the photographs were of interiors of different rooms and passages, and in every one the girl might be seen, either full length in the distance, or closer, with, perhaps, only a hand or arm, or portion of the head or dress included in the photograph. All of these had evidently been taken with some definite aim, that did not have for its first purpose the picturing of the girl, but obviously of her surroundings; and they made me very curious, as you can imagine.

Near the bottom of the pile, however, I came upon something definitely extraordinary. It was a photograph of the girl, standing abrupt and clear in the great blaze of a flashlight, as was plain to be seen. Her face was turned a little upward, as if she had been frightened suddenly by some noise. Directly above her, as though half-formed and coming down out of the shadows, was the shape of a single, enormous hoof.

I examined this photograph for a long time, without understanding it more than that it had probably to do with some queer Case in which Carnacki was interested.

When Jessop, Arkwright, and Taylor came in, Carnacki quietly held out his hand for the photographs, which I returned in the same spirit, and afterwards we all went in to dinner. When we had spent a quiet but profitable hour at the table, we pulled our chairs round, and made ourselves snug; and Carnacki began:-

"I've been North," he said, speaking slowly and painfully, between puffs at his pipe. "Up to Hisgins of East Lancashire. It has been a pretty strange business all round, as I fancy you chaps will think, when I have finished. I knew, before I went, something about the "horse story," as I have heard it called; but I never thought of it as coming my way, somehow. Also I know now that I never considered it seriously -- in spite of my rule always to keep an open mind. Funny creatures, we humans!

"Well, I got a wire, asking for an appointment, which of course told me that there was some trouble. On the date I fixed, old Captain Hisgins himself came up to see me. He told me a great many new details about the horse story; though, naturally, I had always known the main points, and understood that if the first child were a girl, that girl would be haunted by the Horse, during her courtship.

"It is, as you can see, an extraordinary story, and though I have always known about it, I have never thought it to be anything more than old-time legend, as I have already hinted. You see, for seven generations the Hisgins family have had men children for their first-born, and even the Hisgins themselves have long considered the tale to be little more than a myth.

"To come to the present, the eldest child of the reigning family, is a girl, and she has been often teased and warned in jest by her friends and relations that she is the first girl to be the eldest for seven generations, and that she would have to keep her men friends at arm's length, or go into a nunnery, if she hoped to escape the haunting. And this, I think, shows us how thoroughly the tale had grown to be considered as nothing worthy of the least serious thought. Don't you think so?

"Two months ago, Miss Hisgins became engaged to Beaumont, a young Naval Officer, and on the evening of the very day of the engagement, before it was even formally announced, a most extraordinary thing happened, which resulted in Captain Hisgins making the appointment, and my ultimately going down to their place to look into the thing.

It was adapted for the TV series The Rivals of Sherlock Holmes starring Donald Pleasance as the detective:

You can listen to it read to you: