The Tailor by the Hearth 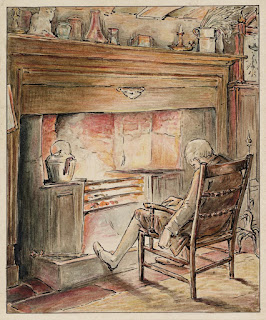 is an illustration from Beatrix Potter's book The Tailor of Gloucester, which takes place in the days leading up to Christmas morning. There is a museum. Potter died on December 22, 1943, of complications from pneumonia and heart disease at the age of 77.

Just look at that cozy scene. That kettle will stay hot, I'm sure, in its place there, and we'll have a cuppa together. Please share your own drink-related post and join the weekly T Stands for Tuesday blogger gathering hosted by Bleubeard and Elizabeth.

You can read the book here or here. It begins,


In the time of swords and periwigs and full-skirted coats with flowered lappets—when gentlemen wore ruffles, and gold-laced waistcoats of paduasoy and taffeta—there lived a tailor in Gloucester.

He sat in the window of a little shop in Westgate Street, cross-legged on a table from morning till dark.

All day long while the light lasted he sewed and snippetted, piecing out his satin, and pompadour, and lutestring; stuffs had strange names, and were very expensive in the days of the Tailor of Gloucester.

But although he sewed fine silk for his neighbours, he himself was very, very poor—a little old man in spectacles, with a pinched face, old crooked fingers, and a suit of threadbare clothes.

He cut his coats without waste; according to his embroidered cloth, they were very small ends and snippets that lay about upon the table—"Too narrow breadths for nought—except waistcoats for mice," said the tailor.

One bitter cold day near Christmas-time the tailor began to make a coat (a coat of cherry-coloured corded silk embroidered with pansies and roses) and a cream-coloured satin waistcoat (trimmed with gauze and green worsted chenille) for the Mayor of Gloucester.

The story has been adapted several times, including a 1999 live-action adaptation starring Ian Holm, Thora Hird, and Jude Law:

and an animated version from 1993: