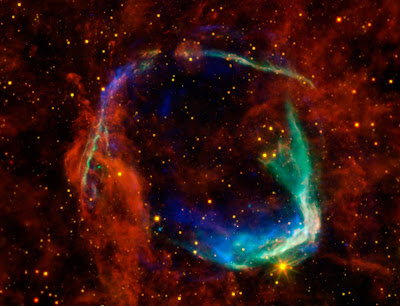 The Star is a 1955 short story by Arthur C. Clarke. I remember how I felt the first time I read this. You can read it online here. It begins,


It is three thousand light years to the Vatican. Once, I believed that space could have no power over faith, just as I believed that the heavens declared the glory of God's handiwork. Now I have seen that handiwork, and my faith is sorely troubled. I stare at the crucifix that hangs on the cabin wall above the Mark VI Computer, and for the first time in my life I wonder if it is no more than an empty symbol.

I have told no one yet, but the truth cannot be concealed. The facts are there for all to read, recorded on the countless miles of magnetic tape and the thousands of photographs we are carrying back to Earth. Other scientists can interpret them as easily as I can, and I am not one who would condone that tampering with the truth which often gave my order a bad name in the olden days.