A House to Let 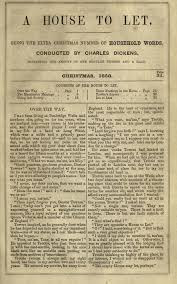 A House to Let is an 1858 short story by Charles Dickens, Wilkie Collins, Elizabeth Gaskell and Adelaide Anne Procter, their first collaboration on a Christmas story. You can read it online here and here. It begins,


I had been living at Tunbridge Wells and nowhere else, going on for ten years, when my medical man—very clever in his profession, and the prettiest player I ever saw in my life of a hand at Long Whist, which was a noble and a princely game before Short was heard of—said to me, one day, as he sat feeling my pulse on the actual sofa which my poor dear sister Jane worked before her spine came on, and laid her on a board for fifteen months at a stretch—the most upright woman that ever lived—said to me, “What we want, ma’am, is a fillip.”

“Good gracious, goodness gracious, Doctor Towers!” says I, quite startled at the man, for he was so christened himself: “don’t talk as if you were alluding to people’s names; but say what you mean.”

“I mean, my dear ma’am, that we want a little change of air and scene.”

“Then Lard forgive you, Doctor Towers,” I said; “why don’t you get into a habit of expressing yourself in a straightforward manner, like a loyal subject of our gracious Queen Victoria, and a member of the Church of England?”

Towers laughed, as he generally does when he has fidgetted me into any of my impatient ways—one of my states, as I call them—and then he began,—

“Tone, ma’am, Tone, is all you require!” He appealed to Trottle, who just then came in with the coal-scuttle, looking, in his nice black suit, like an amiable man putting on coals from motives of benevolence.

Trottle (whom I always call my right hand) has been in my service two-and-thirty years. He entered my service, far away from England. He is the best of creatures, and the most respectable of men; but, opinionated.

“What you want, ma’am,” says Trottle, making up the fire in his quiet and skilful way, “is Tone.”

“Lard forgive you both!” says I, bursting out a-laughing; “I see you are in a conspiracy against me, so I suppose you must do what you like with me, and take me to London for a change.”

For some weeks Towers had hinted at London, and consequently I was prepared for him. When we had got to this point, we got on so expeditiously, that Trottle was packed off to London next day but one, to find some sort of place for me to lay my troublesome old head in.

Trottle came back to me at the Wells after two days’ absence, with accounts of a charming place that could be taken for six months certain, with liberty to renew on the same terms for another six, and which really did afford every accommodation that I wanted.

“Could you really find no fault at all in the rooms, Trottle?” I asked him.

“Not a single one, ma’am. They are exactly suitable to you. There is not a fault in them. There is but one fault outside of them.”

“They are opposite a House to Let.”

Listen to it read to you via Librivox: