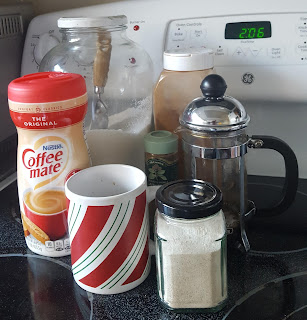 I had a mind to make a snickerdoodle-flavored coffee, and I found this recipe to try. Making it according to the recipe was a total failure, as the mix clogged up the filter and the coffee wouldn't drip into the cup. I tried using the same measurements but substituting instant coffee for the coffee grounds and pouring boiling water over the instant mix, but that was undrinkable: too bitter and the cocoa made the coffee too thick. At this point I gave up. I'd love suggestions on how to make this into a drinkable beverage.

I moved on to trying a snickerdoodle creamer recipe. Now, I always take my coffee black, but I like having a few things around that are different. And I had snickerdoodle on the brain. As I googled my little heart out, I found many recipes that used canned evaporated milk and/or sweetened condensed milk, but I wanted a dry mix that would store easily in my counter-top basket. This one looked like a good start.

I ended up using 1/2 cup coffee creamer, 1/2 cup white sugar, 1/2 tsp cinnamon, and 1/2 tsp allspice to make the jar in the photo above. I put 2 rounded spoonfuls in a cup of French press coffee. I tried it again adding vanilla extract, and I tried it with different amounts of the spices, but I didn't like that as much.

I enjoyed my snickerdoodle experiment, even if it's not something I'll use much. I'd love to find a coffee recipe that would work, as I'd drink it much more often than I'll use this creamer.