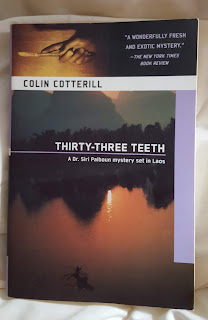 Thirty-Three Teeth is the award-winning second book in the Dr. Siri Paiboun mystery series by Colin Cotterill. I picked up the first of these on a whim and was so pleased with it that I put the next one in the series on my birthday list. This one is just as good as the first, and I will continue to read these as I can. There's a real warmth between the characters that appeals to me, and the setting is fascinating. This book ends during the month of April.


Dr. Siri Paiboun, Laos's reluctant national coroner, has a very odd set of bodies on his hands. Could an old escaped bear be mauling Vientiene citizens? Or is it something more mystical, like a weretiger? When he is summoned to the capital to identify a pair of charred bodies, he realizes the victims are connected to the royal family, which annoys Communist Party leaders. Can Dr. Siri solve the mystery behind the unexplained deaths and keep himself out of jail?

Kirkus Reviews says, "Siri’s second is as entertaining as his debut." Eurocrime has a positive review. Publishers Weekly concludes, "The elegant, elderly Paiboun seems an unlikely vehicle to carry a series ..., but he does so with charm and aplomb."