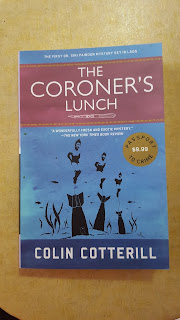 The Coroner's Lunch by Colin Cotterill is the first book in the Dr. Siri Paiboun series. I had never read a book set in Laos and enjoyed the atmosphere and learning something of the culture of the time. The characters are well-drawn, and the plot and sub-plots are fascinating. The book features one character with Down Syndrome who holds a position of responsibility in the coroner's office. This book begins in the Autumn of 1978.


Laos, 1978; Dr. Siri Paiboun, a 72-year-old medical doctor, has unwillingly been appointed the national coroner of the new socialist Laos. His lab is underfunded, his boss is incompetent, and his support staff is quirky, to say the least. But Siri's sense of humor gets him through his often frustrating days. When the body of the wife of a prominent politician comes through his morgue, Siri has reason to suspect the woman has been murdered. To get to the truth, Siri and his team face government secrets, spying neighbors, victim hauntings, Hmong shamans, botched romances, and other deadly dangers. Somehow, Siri must figure out a way to balance the will of the party and the will of the dead.


I was lost in admiration at this wonderful book: for the convincing and sympathetic portrait of a man and his little circle of friends and their lives; and for the exciting and clever dramas that, in the end, come to a completely satisfying conclusion, even solving a mystery very personal to Siri himself.

NPR has an interview with the author. Kirkus Reviews closes by saying, "This series kickoff is an embarrassment of riches: Holmesian sleuthing, political satire, and droll comic study of a prickly late bloomer." Publishers Weekly concludes, "this debut mystery, with its convincing and highly interesting portrayal of an exotic locale, marks the author as someone to watch."
Posted by Divers and Sundry at 4:00 AM