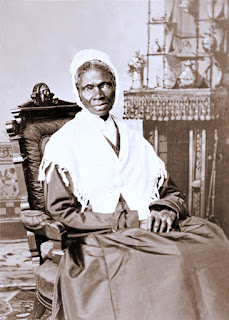 Sojourner Truth was born into slavery in up-state New York in c. 1797 and grew up speaking Dutch. At about 29 years of age she escaped with her infant daughter (one of five children born to her, 4 of whom survived childhood). Learning that her 5 year old son, one of the 3 she had left behind who weren't covered by the New York Emancipation order that covered her and her infant, had been illegally sold to a man in Alabama, she successfully took the matter to court. In 1843 she became a Methodist, adopted the name Sojourner Truth, and began travelling around speaking an abolitionist message. In 1851 she participated in a lecture tour and gave her extemporaneous speech now known as "Ain't I a Woman?". There is no transcript or recording of the speech, and reports differ. No reports from the time include the phrase now used as the title. This is the report from the time from someone who heard the speech given and had her cooperation in the writing of the report:

Marius Robinson, who attended the convention and worked with Truth, printed the speech as he transcribed it in the June 21, 1851, issue of the Anti-Slavery Bugle.

One of the most unique and interesting speeches of the convention was made by Sojourner Truth, an emancipated slave. It is impossible to transfer it to paper, or convey any adequate idea of the effect it produced upon the audience. Those only can appreciate it who saw her powerful form, her whole-souled, earnest gesture, and listened to her strong and truthful tones. She came forward to the platform and addressing the President said with great simplicity: "May I say a few words?" Receiving an affirmative answer, she proceeded:

I want to say a few words about this matter. I am a woman's rights. I have as much muscle as any man, and can do as much work as any man. I have plowed and reaped and husked and chopped and mowed, and can any man do more than that? I have heard much about the sexes being equal. I can carry as much as any man, and can eat as much too, if I can get it. I am as strong as any man that is now. As for intellect, all I can say is, if a woman have a pint, and a man a quart –why can't she have her little pint full? You need not be afraid to give us our rights for fear we will take too much, –for we can't take more than our pint'll hold. The poor men seems to be all in confusion, and don't know what to do. Why children, if you have woman's rights, give it to her and you will feel better. You will have your own rights, and they won't be so much trouble. I can't read, but I can hear. I have heard the bible and have learned that Eve caused man to sin. Well, if woman upset the world, do give her a chance to set it right side up again. The Lady has spoken about Jesus, how he never spurned woman from him, and she was right. When Lazarus died, Mary and Martha came to him with faith and love and besought him to raise their brother. And Jesus wept and Lazarus came forth. And how came Jesus into the world? Through God who created him and the woman who bore him. Man, where was your part? But the women are coming up blessed be God and a few of the men are coming up with them. But man is in a tight place, the poor slave is on him, woman is coming on him, he is surely between a hawk and a buzzard.

The modern version now known was a re-write of Truth's words that cast her speech pattern and dialect as if she were a poor, black Southerner, quoting her at one point as saying, "Den dat little man in black dar, he say women can't have as much rights as men, 'cause Christ wan't a woman! Whar did your Christ come from?" It's not likely that this is what a woman of any race would sound like who had grown up speaking Dutch in up-state New York. Her speech was re-invented, and although there's no official transcript from the original speech, it's certain to have been much closer to the 1851 report from Robinson, who worked with Truth to compose his report. The speech has taken on a life of its own -over and above whatever she actually said in 1851- and I guess I'm just going to have to accept that what's understood to be what happened ain't always connected with what actually happened in much of history.

There have been attempts to reconstruct her speech using Afro-Dutch accented English, her particular dialect having been lost and not reconstructable, and the earliest report of the speech. Here's one:

Sojourner Truth died on this date in 1883.
Posted by Divers and Sundry at 4:00 AM