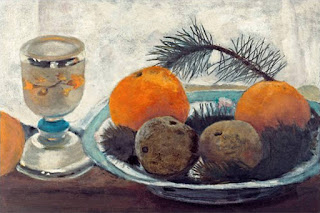 by Paula Modersohn-Becker, who died of a postpartum embolism at the age of 31 on November 21, 1907, after the birth of her first child. These early deaths are tragic. She was the first artist to paint nude self-portraits, and the New Yorker article gives a sense of what she might have accomplished had she lived. Her last words: "What a pity." What an understatement!

She has a museum in Bremen, "the first museum in the world to be dedicated to the work of a female painter."

Rainer Maria Rilke wrote Requiem for a Friend in her memory. It is in the public domain, but this translation is not, so I will post an excerpt and link to the original. There is a translation that can be used for non-commercial purposes here.


Requiem for a Friend

I have my dead and I have let them go and was amazed to see them so contented, so at home in being dead, so cheerful, so unlike their reputation. Only you return; brush past me, loiter, try to knock against something, so that the sound reveals your presence. Oh don’t take from me what I am slowly learning. I’m sure you have gone astray if you are moved to homesickness for anything in this dimension. We transform these Things; they aren’t real, they are only the reflections upon the polished surface of our being.

I thought you were much further on. It troubles me that you should stray back, you, who have achieved more transformation than any other woman.That we were frightened when you died... no; rather: that your stern death broke in upon us, darkly, wrenching the till-then from the ever-since - this concerns us: setting it all in order is the task we have continually before us. But that you, too, were frightened, and even now pulse with your fear, where fear can have no meaning; that you have lost even the smallest fragment of your eternity, Paula, and have entered here, where nothing yet exists; that out there, bewildered for the first time, inattentive, you didn’t grasp the splendor of the infinite forces, as on earth you grasped each Thing; that, from the realm which had already received you, the gravity of some old discontent had dragged you back to measurable time. This often startles me out of dreamless sleep at night, like a thief climbing in my window.


Are you still here? Are you standing in some corner? You knew so much of all this, you were able to do so much; you passed through life so open to all things, like an early morning. I know: women suffer; for love means being alone; and artists in their work sometimes intuit that they must keep transforming, where they love. You began both; both exist in that which any fame takes from you and disfigures. Oh you were far beyond all fame; were almost invisible; had withdrawn your beauty, softly, as one would lower a brightly colored flag on the gray morning after a holiday. You had just one desire: a year’s long work - which was never finished; was somehow never finished. If you are still here with me, if in this darkness there is still some place where your spirit resonates on the shallow sound waves stirred up by my voice: hear me: help me. We can so easily slip back from what we have struggled to attain, abruptly, into a life we never wanted; can find that we are trapped, as in a dream, and die there, without ever waking up. This can occur. Anyone who has lifted his blood into a years-long work may find that he can’t sustain it, the force of gravity is irresistible, and it falls back, worthless. For somewhere there is an ancient enmity between our daily life and the great work. Help me, in saying it, to understand it.

Do not return. If you can bear to, stay dead with the dead. The dead have their own tasks. But help me, if you can without distraction, as what is farthest sometimes helps: in me.


She had painted his portrait the year before her death: 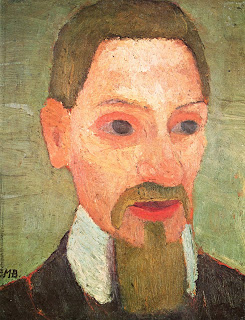 The glass in the painting at the top of my post is my connection to T Stands for Tuesday, where we share a post with a drink in it and visit with each other. Join me? A warm welcome is waiting for you.
Posted by Divers and Sundry at 4:00 AM