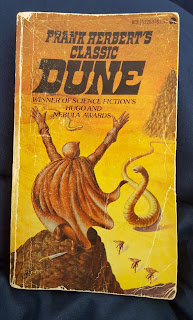 Dune is the multiple award-winning first book in the series by Frank Herbert. A classic, I've read it several times.


Dune is one of the rare novels that has met with unanimous praise, both in science fiction and literary circles. Since the time of its first publication, it has become a best-selling classic, hailed as a landmark in the field and as an amazing feat of creation.


Set in the distant future amidst a feudal interstellar society in which various noble houses control planetary fiefs, Dune tells the story of young Paul Atreides, whose family accepts the stewardship of the planet Arrakis. While the planet is an inhospitable and sparsely populated desert wasteland, it is the only source of melange, or "the spice", a drug that extends life and enhances mental abilities.[7] As melange can only be produced on Arrakis, control of the planet is a coveted and dangerous undertaking. The story explores the multi-layered interactions of politics, religion, ecology, technology, and human emotion, as the factions of the empire confront each other in a struggle for the control of Arrakis and its spice.

The New Yorker praises it, calls it a classic, and says,


“Dune” is an epic of political betrayal, ecological brinkmanship, and messianic deliverance. It won science fiction’s highest awards —the Hugo and the Nebula— and went on to sell more than twelve million copies during Herbert’s lifetime. As recently as last year, it was named the top science-fiction novel of all time in a Wired reader’s poll.

The Guardian says, "It has sold millions of copies, is perhaps the greatest novel in the science-fiction canon and Star Wars wouldn’t have existed without it. Frank Herbert’s Dune should endure as a politically relevant fantasy". SFReviews.net opens with this: "Literary landmark and pop culture icon, Frank Herbert's epoch-making Dune has for so long held the crown as the Most Important SF Novel Evar".
Posted by Divers and Sundry at 4:00 AM