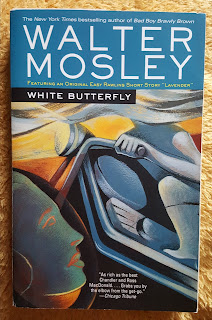 White Butterfly by Walter Mosley is the 3rd book in the Easy Rawlins mystery series. I've enjoyed taking a look at Los Angeles in the 1950s from the point of view of this detective. There's atmosphere galore here and a look at race relations and African American culture from those days.


The police don't show up on Easy Rawlins's doorstep until the third girl dies. It's Los Angeles, 1956, and it takes more than one murdered black girl before the cops get interested. Now they need Easy. As he says, "I was worth a precinct full of detectives when the cops needed the word in the ghetto." But Easy turns them down. He's married now, a father -and his detective days are over. Then a white college coed dies the same brutal death, and the cops put the heat on Easy. If he doesn't help, his best friend is headed for jail. So Easy's back, walking the midnight streets of Watts and the darker, twisted avenues of a cunning killer's mind....

The New York Times has a positive review. Kirkus Reviews concludes, "As usual, plotting, setting, dialogue, and social comment are all as mannered as Raymond Chandler and -if the manner doesn't put you off- nearly as compelling."

I've also read these from this series: