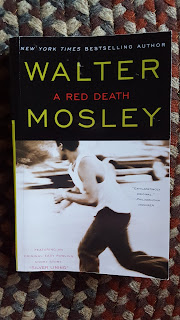 A Red Death by Walter Mosley is the 2nd book in the Easy Rawlins mystery series, and an interesting look at African American culture in California during the 1950s. I'm enjoying these and look forward to the next one.


It's 1953 in red-baiting, blacklisting Los Angeles, a moral tar pit ready to swallow Easy Rawlins. Easy is out of "the hurting business" and into the housing (and favor) business when a racist IRS agent nails him for tax evasion. Special Agent Darryl T. Craxton, FBI, offers to bail him out if he agrees to infiltrate the First American Baptist Church and spy on alleged communist organizer Chaim Wenzler. That's when the murders begin....

The New York Times closes by saying, "Mr. Mosley has depicted a special locale and a corner-cutting way of life that most readers will find far more riveting than the crime pages of their newspapers." Kirkus Reviews praises it.
Posted by Divers and Sundry at 4:00 AM