I Live in Fear 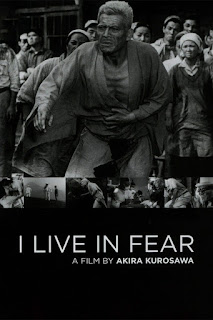 I Live in Fear is a 1955 film directed by Akira Kurosawa and starring Toshiro Mifune and Takashi Shimura, a trio that never fail to make a wonderful movie. This one is about a factory worker who is frightened of a nuclear attack and is devoting all his effort to moving his loved ones to safety in Brazil. His family fights him every step of the way, going to great lengths to prevent him from realizing his plan. The fear is tragic, but anyone who lived through the Cold War or 9/11 or the current presidency so far can surely connect with the desire to pick up lock, stock, and barrel and move some place safer.

I watched it free (but with commercials) at Hulu. You can watch a trailer at MUBI. I can't find even a clip to embed.

There's what sounds like a theremin in the score. 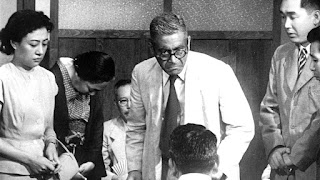 The NYT review from 1967 calls it "one of the weakest of the great Japanese director's works". TCM has an article which opens with this: "One of the first Japanese commercial features to directly address the fear of nuclear holocaust and the implications of the atom bomb, I Live in Fear (1955, aka Record of a Living Being) was an unusual and unexpected movie for director Akira Kurosawa." Time Out notes it as "Kurosawa's least commercially successful work" but argues it is successful in some ways: "Kurosawa remains the cinema's supremely humanist emotional manipulator".

Slate opens with this: "If someone should feel compelled to make a film about 9/11—specifically, about the social and psychic toll that the attacks have and haven't taken—a good model would be Akira Kurosawa's I Live in Fear".

Rotten Tomatoes has a critics score of 70%.
Posted by Divers and Sundry at 4:00 AM