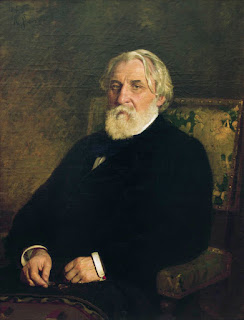 A Sportsman's Sketches (1852) is a short story collection by Ivan Turgenev. I've read that this work was partially responsible for Turgenev's house arrest. The book is available online in translation here or here, which is where I read it. Individually they are interesting enough just as stories, but taken as a whole they provide a picture of a life that must have been terribly difficult.

Khor and Kalinych, the first story in the collection, begins with this:


Anyone who has chanced to pass from the Bolhovsky district into the Zhizdrinsky district, must have been impressed by the striking difference between the race of people in the province of Orel and the population of the province of Kaluga. The peasant of Orel is not tall, is bent in figure, sullen and suspicious in his looks; he lives in wretched little hovels of aspen-wood, labours as a serf in the fields, and engages in no kind of trading, is miserably fed, and wears slippers of bast: the rent-paying peasant of Kaluga lives in roomy cottages of pine-wood; he is tall, bold, and cheerful in his looks, neat and clean of countenance; he carries on a trade in butter and tar, and on holidays he wears boots. The village of the Orel province (we are speaking now of the eastern part of the province) is usually situated in the midst of ploughed fields, near a water-course which has been converted into a filthy pool. Except for a few of the ever-accommodating willows, and two or three gaunt birch-trees, you do not see a tree for a mile round; hut is huddled up against hut, their roofs covered with rotting thatch. The villages of Kaluga, on the contrary, are generally surrounded by forest; the huts stand more freely, are more upright, and have boarded roofs; the gates fasten closely, the hedge is not broken down nor trailing about; there are no gaps to invite the visits of the passing pig. And things are much better in the Kaluga province for the sportsman. In the Orel province the last of the woods and copses will have disappeared five years hence, and there is no trace of moorland left; in Kaluga, on the contrary, the moors extend over tens, the forest over hundreds of miles, and a splendid bird, the grouse, is still extant there; there are abundance of the friendly larger snipe, and the loud-clapping partridge cheers and startles the sportsman and his dog by its abrupt upward flight.

On a visit to the Zhizdrinsky district in search of sport, I met in the fields a petty proprietor of the Kaluga province called Polutikin, and made his acquaintance. He was an enthusiastic sportsman; it follows, therefore, that he was an excellent fellow. He was liable, indeed, to a few weaknesses; he used, for instance, to pay his addresses to every unmarried heiress in the province, and when he had been refused her hand and house, broken-hearted he confided his sorrows to all his friends and acquaintances, and continued to shower offerings of sour peaches and other raw produce from his garden upon the young lady’s relatives; he was fond of repeating one and the same anecdote, which, in spite of Mr. Polutikin’s appreciation of its merits, had certainly never amused anyone; he admired the works of Akim Nahimov and the novel Pinna; he stammered; he called his dog Astronomer; instead of ‘however’ said ‘howsomever’; and had established in his household a French system of cookery, the secret of which consisted, according to his cook’s interpretation, in a complete transformation of the natural taste of each dish; in this artiste’s hands meat assumed the flavour of fish, fish of mushrooms, macaroni of gunpowder; to make up for this, not a single carrot went into the soup without taking the shape of a rhombus or a trapeze. But, with the exception of these few and insignificant failings, Mr. Polutikin was, as has been said already, an excellent fellow.

On the first day of my acquaintance with Mr. Polutikin, he invited me to stay the night at his house. ‘It will be five miles farther to my house,’ he added; ‘it’s a long way to walk; let us first go to Hor’s.’ (The reader must excuse my omitting his stammer.)

‘A peasant of mine. He is quite close by here.’

We went in that direction. In a well-cultivated clearing in the middle of the forest rose Hor’s solitary homestead. It consisted of several pine-wood buildings, enclosed by plank fences; a porch ran along the front of the principal building, supported on slender posts. We went in. We were met by a young lad of twenty, tall and good-looking.

‘No. Hor has gone into town,’ answered the lad, smiling and showing a row of snow-white teeth. ‘You would like the little cart brought out?’

‘Yes, my boy, the little cart. And bring us some kvas.’

We went into the cottage. Not a single cheap glaring print was pasted up on the clean boards of the walls; in the corner, before the heavy, holy picture in its silver setting, a lamp was burning; the table of linden-wood had been lately planed and scrubbed; between the joists and in the cracks of the window-frames there were no lively Prussian beetles running about, nor gloomy cockroaches in hiding. The young lad soon reappeared with a great white pitcher filled with excellent kvas, a huge hunch of wheaten bread, and a dozen salted cucumbers in a wooden bowl. He put all these provisions on the table, and then, leaning with his back against the door, began to gaze with a smiling face at us. We had not had time to finish eating our lunch when the cart was already rattling before the doorstep. We went out. A curly-headed, rosy-cheeked boy of fifteen was sitting in the cart as driver, and with difficulty holding in the well-fed piebald horse. Round the cart stood six young giants, very like one another, and Fedya.

‘These are all Horkies’ (i.e. wild cats), put in Fedya, who had come after us on to the step; ‘but that’s not all of them: Potap is in the wood, and Sidor has gone with old Hor to the town. Look out, Vasya,’ he went on, turning to the coachman; ‘drive like the wind; you are driving the master. Only mind what you’re about over the ruts, and easy a little; don’t tip the cart over, and upset the master’s stomach!’

The other Horkies smiled at Fedya’s sally. ‘Lift Astronomer in!’ Mr. Polutikin called majestically. Fedya, not without amusement, lifted the dog, who wore a forced smile, into the air, and laid her at the bottom of the cart. Vasya let the horse go. We rolled away. ‘And here is my counting-house,’ said Mr. Polutikin suddenly to me, pointing to a little low-pitched house. ‘Shall we go in?’ ‘By all means.’ ‘It is no longer used,’ he observed, going in; ‘still, it is worth looking at.’ The counting-house consisted of two empty rooms. The caretaker, a one- eyed old man, ran out of the yard. ‘Good day, Minyaitch,’ said Mr. Polutikin; ‘bring us some water.’ The one-eyed old man disappeared, and at once returned with a bottle of water and two glasses. ‘Taste it,’ Polutikin said to me; ‘it is splendid spring water.’ We drank off a glass each, while the old man bowed low. ‘Come, now, I think we can go on,’ said my new Friend. ‘In that counting-house I sold the merchant Alliluev four acres of forest-land for a good price.’ We took our seats in the cart, and in half-an-hour we had reached the court of the manor-house.

‘Tell me, please,’ I asked Polutikin at supper; ‘why does Hor live apart from your other peasants?’

‘Well, this is why; he is a clever peasant. Twenty-five years ago his cottage was burnt down; so he came up to my late father and said: “Allow me, Nikolai Kouzmitch,” says he, “to settle in your forest, on the bog. I will pay you a good rent.” “But what do you want to settle on the bog for?” “Oh, I want to; only, your honour, Nikolai Kouzmitch, be so good as not to claim any labour from me, but fix a rent as you think best.” “Fifty roubles a year!” “Very well.” “But I’ll have no arrears, mind!” “Of course, no arrears”; and so he settled on the bog. Since then they have called him Hor’ (i.e. wild cat).

‘Well, and has he grown rich?’ I inquired.

*******
This counts towards my Russia book challenge.
Posted by Divers and Sundry at 4:00 AM