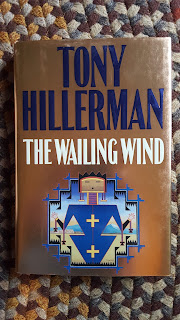 The Wailing Wind by Tony Hillerman is the 15th in the Leaphorn/Chee detective series. I'm a huge fan of this entire series and have been reading them for years. I've grown to know and love these men and find their lives engaging and the plots interesting.

To Officer Bernadette Manuelito, the man curled up on the truck seat was just another drunk, which got Bernie in trouble for mishandling a crime scene, which got Sergeant Jim Chee in trouble with the FBI, which drew Lieutenant Joe Leaphorn out of retirement and back into the old "Golden Calf" homicide, a case he had hoped to forget.

Nothing had seemed complicated about that earlier one: A con game had gone sour. A swindler had tried to sell wealthy old Wiley Denton the location of one of the West's multitude of legendary lost gold mines. Denton has shot the swindler, called the police, confessed the homicide, and done his short prison time. No mystery there.

Except why did the rich man's bride vanish? The cynics said she was part of the swindle plot. She's fled when it failed. But, alas, old Joe Leaphorn was a romantic. He believed in love, and this the Golden Calf case still troubled him. Now, papers found in this new homicide case connect the victim to Denton and to the mythical Golden Calf Mine. The first Golden Calf victim had been there just hours before Denton killed him. And while Denton was killing him, four children trespassing among the rows of empty bunkers in the long-abandoned Wingate Ordnance Depot called in an odd report to the police. They had heard, in the wind wailing around the old buildings, what sounded like music and the cries of a woman.

Bernie Manuelito uses her knowledge of Navajo country, its tribal traditions, and her friendship with a famous old medicine man to unravel the first knot of this puzzle, with Jim Chee putting aside his distaste for the FBI to help her. But the questions raised by this second Golden Calf murder aren't answered until Leaphorn solves the puzzle left by the first one and discovers what the young trespassers heard in the wailing wind.

Kirkus Reviews concludes, "Top-notch detective work by all hands, a solution fully worthy of the puzzle, and all the hard-won wisdom on cultural clashes between Navajos and whites you’d expect from Hillerman". January Magazine closes with this: "The Wailing Wind is an absorbing, suspenseful, moving tale that only Tony Hillerman could have written. It's lovely to see this consummate craftsman, now in his late 70s, continue to raise his game." Publishers Weekly says, "Hillerman repeatedly shines in this masterfully complex new novel."

I've read these from this series: