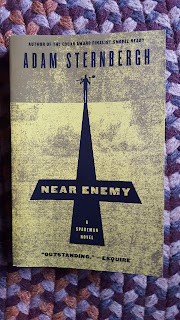 Near Enemy by Adam Sternbergh is the 2nd book in the Spademan near-future series. I enjoyed the first one much more, I think because the concept was new to me. Without that novelty there's just not really that much here for me.


New York is toxic -decimated by a dirty bomb. The only people still in the city are those too stubborn to leave -and those rich enough to escape to a virtual-reality haven, oblivious to the horrors raging outside their windows.

But for Spademan, the city's still home. And for a hit man, it's not a bad place to earn a paycheck.

At least, that is, until a routine job reveals a secret he can't ignore: terrorists are getting ready to attack the city again. This time in a way that should be impossible -and that will leave the crippled city in ruins.

Spademan may be a killer, and New York may be a wasteland, but he'll be damned if he doesn't try to stop what's coming. And unless he can figure out who his true enemies are, he may be damned either way.

Near Enemy is another hard-hitting, cyberpunk-infused noir from Edgar Award finalist Adam Sternbergh, featuring an unforgettable antihero and a terrifying, insidious enemy.

The Globe and Mail says,


Near Enemy’s plot twists and revelations aren’t so much obvious as plain boring. Did you know that people in positions of power are sometimes corrupt? Did you know that, heck, even the police aren’t above such depravity? Did you ever think that maybe in the West there’s a tendency to scapegoat Muslim communities? Near Enemy unfolds like Baby’s First Post-9/11 Allegory.

Kirkus Reviews concludes, "The machinations of all this sinister reality remain rather abstract and thus wind up having far more interest to Spademan than to the reader." Publishers Weekly says that "Sternbergh laces his second cyberpunk voyage with dark humor and eccentric characters". Fantastic Fiction calls it "Perfect for fans of INCEPTION, LOOPER and Hugh Howie."