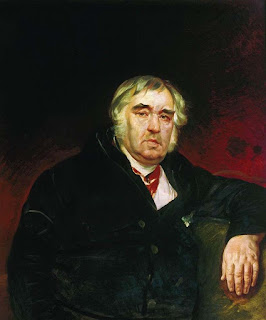 Ivan Krylov, sometimes referred to as "the Russian La Fontaine," is best known for his fables. He led an interesting life, and there are short biographies at Russiapedia and Encyclopedia.com. Encyclopedia Britannica says,


Although some of his themes were borrowed from Aesop and La Fontaine, they altered in Krylov’s hands. His foxes and crows, wolves and sheep, whether wise or foolish, were always recognizable Russian types. His salty, down-to-earth parables emphasized common sense, hard work, and love of justice and made him one of the first Russian writers to reach a broad audience.

I read the fables online. They are readily available in translation at the internet archive here, here, and here. I prefer the prose translations. Here's one of them:

A shepherd by the side of a brook complainingly sang, in his grief, of his sad and irreparable loss. His pet lamb had lately been drowned in the neighbouring river. Having heard the Shepherd, the Brook thus began to murmur indignantly:

"Insatiable river! how would it be if thy depths, like mine, were clearly visible to all eyes, and every one could see, in thy most secret recesses, all the victims which thou hast so greedily swallowed up? I think that thou wouldst dive into the earth for shame, and hide thyself in its dark abysses. Methinks that, if Fate gave me such copious waters, I should become an ornament to Nature, and would never hurt even so much as a chicken. How cautiously should my waves roll past every bush, every cottage! My shores would only bless me, and I should bring fresh life to the adjacent valleys and meadows, without robbing them of so much as even a single leaflet. Then, in a word, I should perform my journey in a kindly spirit, nowhere causing misfortune or sorrow, and my waters should flow right down to the sea as pure as silver."

So spake the Brook, and so it really meant. But what happened? A week had not gone by before a heavy raincloud burst upon a neighbouring hill. In its affluence of waters the Brook suddenly rivalled the river. But, alas! what has become of the Brook's tranquility? The Brook overflows its banks with turbid waters. It seethes; it roars; it flings about masses of soiled foam. It overthrows ancestral oaks: their crashing may be heard afar. And, at last, that very shepherd, on whose account it lately upbraided the river with such a flow of eloquence, perished in it with all his flock, and of his cottage not even a trace was left behind.

How many brooks are there which flow along so smoothly, so peacefully, and murmur so sweetly to the heart, only because they have but very little water in them!