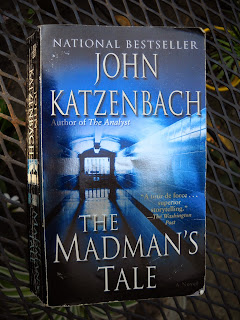 The Madman's Tale is a mystery/thriller novel by John Katzenbach. The Younger Son suggested this when I complained about the David Baldacci book I had read, saying this author was a much better writer of much more interesting stories. Just on the basis of these two books, I'm in agreement. This was a real page-turner.

It's been twenty years since Western State Hospital was closed down. Francis Petrel was barely out of his teens when his family committed him to the asylum for his erratic behavior. Now middle-aged, he leads an aimless life, perpetually medicated to quiet the chorus of voices in his head. But a reunion on the grounds of the shuttered institution stirs something deep in Francis's troubled mind: dark memories about the unsolved murder of a young nurse whose mutilated corpse was discovered late one night after lights-out. Who was her murderer? Now, like Francis's long-buried recollections, the killer has resurfaced... with a vengeance.

quote from the book:

One of the things I learned in my maddest years was that one could be in a room, with walls and barred windows and locks on the doors, surrounded by other crazy people, or even stuffed into an isolation cell all alone, but that really wasn't the room one was in at all. The real room that one occupied was constructed by memory, by relationships, by events, by all sorts of unseen forces. Sometimes delusions. Sometimes hallucinations. Sometimes desires. Sometimes dreams and hopes, or ambition. Sometimes anger. That was what was important: to always recognize where the real walls were.

Kirkus Reviews has a positive review. Publishers Weekly describes it as "an uplifting story of justice, friendship, mystery and, above all, the courage of certain men and women who rise up, no matter the circumstances, to defeat evil, no matter the consequences."
Posted by Divers and Sundry at 4:30 AM